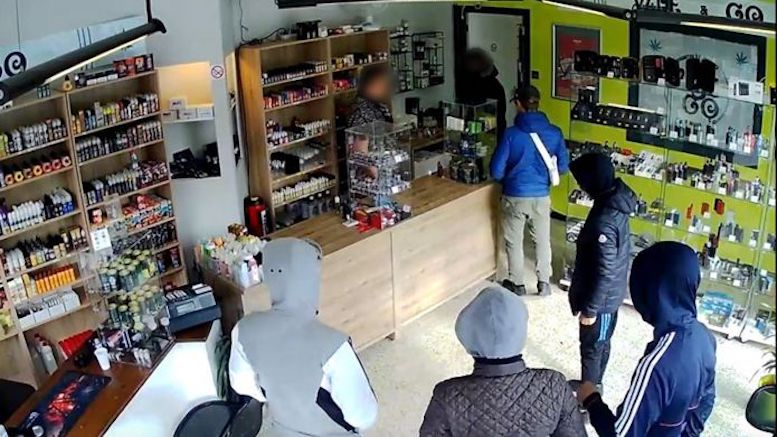 "If you come back at closing time, there'll be more for you to steal." "Good idea."

“They’re being called the worst robbers in Belgium,” the owner of an e-cigarette shop told the BBC last week, referring to the six men he convinced to come back and rob him at closing time instead, when he would have more money to give them. He didn’t say who was calling them that, or whether the person he was quoting actually has the official authority to make such a determination.

In a federal system like the EU, of course, determinations like that are at least theoretically left up to local authorities, so in Belgium that would presumably be the Belgian Federal Police. But it looks like they don’t keep track of this, or if they do, it’s not available to the public. Their website does have a sort of “Belgium’s Most Wanted” page, but that’s not a list of the “worst” in the sense of “least competent.” I sent them an email asking if they were aware of any Belgian robbers who were worse than these six. I had to write in English, which probably makes it even less likely I will get a response, but if so I will certainly post it.

Another possible source would be the European Police Office (Europol), if the owner’s source meant something like, “we keep a list of the worst robbers in each EU member state, and we wanted to let you know that the people who robbed you are the worst robbers in Belgium.” (Europol would be in a better position to evaluate whether these robbers are worse than, say, the worst robbers in Luxembourg or Malta, but that doesn’t seem to have been the issue.) Europol does of course have data pertaining to member states; for example, I found this recent press release about the dismantling of an organized-crime group that seems to have specialized in stealing portable gardening tools. See “Garden Equipment Thieves Reap What They Sow: Seven Arrested in France and Romania,” Europol (26 Oct. 2018). These particular robbers (well, burglars) were probably not worse than the Belgians, because they are suspected of committing at least 65 burglaries, at least 64 of which I assume were temporarily successful.

Again, though, if Europol keeps track of this kind of thing, they haven’t posted it on their website. Europol has a Twitter page, so I used that to ask them the same question I asked the Belgians. The chances of a response may be very slightly larger, if only because English is one of the EU’s official languages. Again, any response will certainly be posted.

Could the owner’s source have been me? I do run a website that purports to specialize in “legal humor” and includes a category called “The Criminal Mind” containing quite a few mentions of people who did not display any special aptitude for crime. Still, a search for “worst robber in Belgium” turned up nothing at all. (My sources there are limited, unfortunately.) It is therefore very unlikely that I was the source.

Did I run a broader search for “worst robber” while I was there, and am I about to tell you the results? I am. At the top of the list was this item about a Portland man who tried to rob a coin-operated car wash, but dropped his gun, which “fell apart”; and when he tried to continue the robbery armed with only a fist, he was driven off with a car-wash hose by a guy wearing a Santa hat. Man, that was a poor effort. See also, e.g., “I Bet That Finger Wasn’t Even Loaded” (Nov. 1, 2014); “Busy Bank Robbers Call Ahead, Place Order to Go” (Mar. 24, 2010); “Robbers ‘Overly Prepared,’ Says Guard Who Chased and Sat on Them” (Jan. 12, 2009); “Man Claiming to Be Armed With Mouth Bomb Fails in Robbery Attempt” (Oct. 6, 2005). They all sucked, too.

But none of them were Belgian.

Oh, speaking of the Belgians, turns out the owner never intended to give them any money at all!  He just wanted to get them out of the store so he could call the police. He didn’t think they’d actually come back, but they did. In fact, they came back twice, but the first time it was still an hour before closing. Guys, this isn’t what we discussed: “[The owner] told local media he saw one of the robbers at the door and told them it still was not end of business.” Also, the police apparently hadn’t arrived yet, though I assume he didn’t tell them that. But when the robbers came back yet again—this time at 6:30 sharp, as requested—the cops were there.

According to the report, though, only five people were arrested, so there’s at least one Belgian robber who can still say he’s not one of “the worst robbers in Belgium.” Not quite.

Arizona Considering Bill That Would Punish “Dissent” in Public Schools