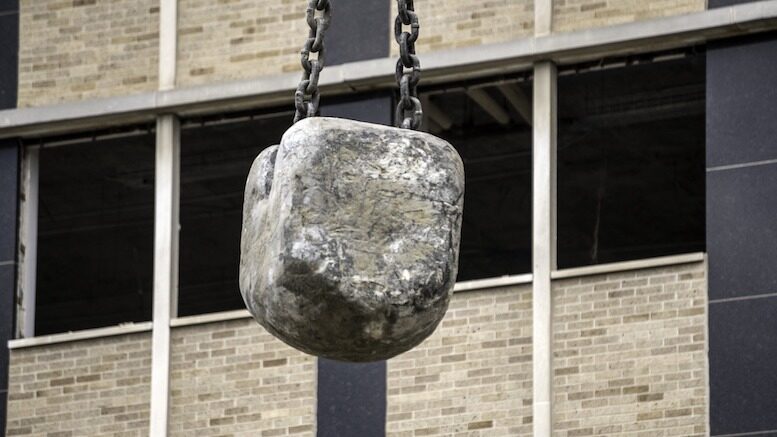 A wrecking ball, similar to that which the man claimed to have come in as

Who among us has not accidentally driven into a building three times due to an unfortunate podiatric misadventure while screaming obscenities and later been found by police sitting in the truck bed while the speakers blast “Wrecking Ball” by Miley Cyrus?

Let him cast the first stone.

Sources reported this week that a 38-year-old Florida man had been arrested after a woman called 911 to report that he was ramming his truck into her home. The woman said she heard a loud bang, heard someone shouting “F*** you,” and looked out to see a man “driving his truck into the house on purpose.” Police arrived to find that both of the house’s garage doors were heavily damaged and the window near the front door was caved in. The apparent culprit was sitting in the bed of his heavily damaged truck as the aforementioned “Wrecking Ball” played, which means either they got there within three minutes and 41 seconds or he had it on repeat.

Or perhaps it was a coincidence, which would be consistent with the man’s explanation for the incident: he “told officers his ‘foot slipped,’ causing him to crash into the house three times.” This formulation makes it unclear whether he told them his foot slipped three times, or the reporter was editorializing a bit based on the evidence of at least three separate impacts upon the building. Both interpretations are amusing, for different reasons.

The man and woman “know each other,” according to the reports, which do not elaborate. He told officers that the woman was “not a good person” and that the incident was “a message.” It actually conveyed a number of messages, one of which was “I would like to go to prison.”

According to the report, the man was charged with two felony counts: the always popular “criminal mischief” (here, a third-degree felony because the damage exceeded $1,000) and the less immediately obvious “shooting into or throwing deadly missiles into dwellings” or vehicles (a second-degree felony).

In Florida a criminal mischieviant (not a word, but should be) is one who “willfully and maliciously injures or damages by any means any real or personal property belonging to another,” which is broad enough to cover everything from graffiti to the invasion of Ukraine, so that one seems pretty solid.

Whether the other statute applies isn’t clear from the title, depending on your definition of “missile.” One could argue that a “missile” must at some point move through the air, although at least the OED defines it a little more broadly: “An object propelled (either by hand or mechanically) as a weapon at a target.” Most of those would move through the air, but not necessarily, as this boulder I’m about to roll over your foot will demonstrate, if you would just hold still. The super-wordy, comma-strewn text of the Florida statute is similarly broad:

Whoever, wantonly or maliciously, shoots at, within, or into, or throws any missile or hurls or projects a stone or other hard substance which would produce death or great bodily harm, at, within, or in any public or private building, occupied or unoccupied, or public or private bus or any train, locomotive, railway car, caboose, cable railway car, street railway car, monorail car, or vehicle of any kind which is being used or occupied by any person, or any boat, vessel, ship, or barge lying in or plying the waters of this state, or aircraft flying through the airspace of this state shall be guilty of a felony….

The front of a Chevy truck is a “hard substance” that “would produce death or bodily harm” if it hit someone, and this one intersected with a “private building.” It was not “shot,” “thrown,” or “hurled,” but it’s probably fair to say the driver “projected” it forward. See OED, project, v. (“[T]o throw, cast, or shoot forwards or onwards,” e.g., T. Venner, Via Recta vii. 148 (1620) (“It proiecteth … those excrements which sticke to the bowels”).) Thus, the law doth seem to apply.

Or at least it would if these acts had been “wanton or malicious,” as the statute requires. But as the man clearly explained to police, all three were accidental and due only to foot slippage. Also, the First Amendment precludes the government from using his musical preferences as circumstantial evidence against him, or at least that argument would be just as good.

Slight Problems Found With “Nurse of the Year” Award