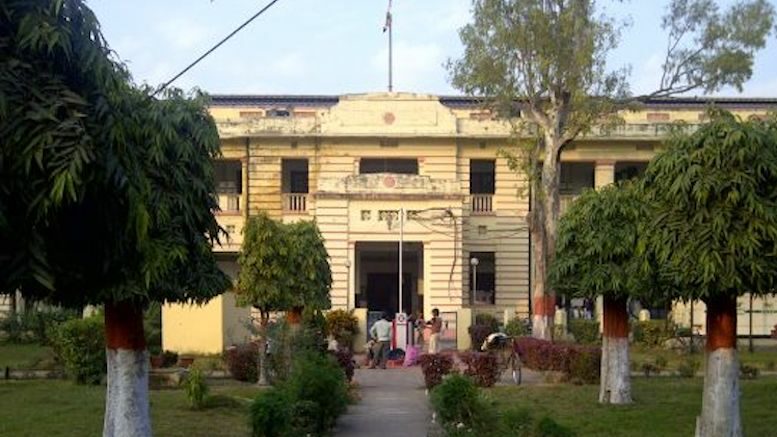 This advice is specific to the High Court for the district of Patna, in India’s Bihar Province, but on the other hand it’s pretty good advice in general, in my opinion, wherever you may be practicing.

According to NDTV, a bomb went off inside the Patna courtroom last Friday, luckily causing only one minor injury even though the bomb was sitting on the assistant prosecutor’s table at the time. Police do not seem to have suspected terrorism, most likely because they brought the bomb to the courthouse in the first place.

In fact, they brought two. Police had seized them while searching a “students’ hostel,” according to the report, and a sub-inspector brought the bombs to court as evidence in a case related to the search. (The report actually identifies him as “Sub Inspector Rai,” but Patna is a long way from the ocean so I feel safe adding the hyphen.) He put a box containing one of the bombs on the prosecutor’s table, and it exploded.

It’s not clear how much time elapsed between placement and explosion. The bomb injured the same officer who put the box down, and police later said it detonated “due to the heat caused by friction.” That may suggest it blew up right away; the explosion was said to be “of low intensity,” which would explain why the officer’s injury was minor. It definitely suggests this was a crappy bomb design, but then I guess they did seize it from students. Luckily, they don’t seem to have learned much about bomb-making yet.

On the other hand, the design was sophisticated enough to defeat the Patna police’s bomb-disposal unit. How do we know this? Well, if you were paying attention above, you’ll recall police brought two bombs into the courtroom. One had exploded, which meant the courtroom then contained one (1) unexploded bomb and a lot of people with zero (0) confidence in the police’s ability to handle it.

According to the report, the realization that there was a second bomb “caus[ed] panic in the courtroom,” though it’d be probably be more accurate to say it was the first bomb that caused it and the second one made it worse. The report then says “[t]hings took a dramatic turn when the bomb disposal unit of Patna Police said they would not be able to defuse the bomb,” though, again, it’d probably be more accurate to say the real “dramatic turn” was when the first bomb went off. But I guess there could be more than one dramatic turn, especially if there’s more than one bomb.

I don’t want to sound too critical of the Patna unit’s skills, because according to the report, they didn’t say they could not defuse the bomb, which might suggest they had tried and failed. They said they “would not be able to defuse the bomb,” which suggests they believed things were much safer outside the courtroom with the bomb in it, thank you very much, which is certainly true but not really what you want to hear from your bomb-disposal unit. On the other hand, maybe the second bomb’s design was more sophisticated. We don’t know.

Ultimately, the second presumably live bomb was left inside the courtroom for two hours while police waited for a bomb-disposal unit from the state’s Anti-Terrorism Squad (like a SWAT team) to arrive. That unit succeeded in either defusing the bomb or getting it out of there, probably both.

My favorite line in the report is about halfway down, when the writer notes that “[a]ccording to rules, any explosive brought to the court as evidence has to be defused first.” Frustratingly, there is no citation to the court rule that requires this. It’s the kind of rule you’d like to think you don’t need to write down, of course, but then something stupid happens and you think, well, maybe you do. I was very interested to see whether the Patna court’s rules really do require this, but couldn’t find a copy of the current rules on its website. The “High Court Rules” link goes here, but that page links to 57 different documents dating back to 2008. Most if not all of them are individual amendments to the rules, though, and if there’s a current complete set (or even the original that all these amended), I couldn’t find it. Searching the entire site for “bomb,” “explosive,” and “defuse” yielded no useful results, sadly.

On the other hand, I couldn’t find any specific rule in my local U.S. courts expressly requiring exhibits to be defused, either. My quest did not include running the searches above on those courts’ websites, not that the government would spy on my searches but of course it does that and I don’t want to give anybody the wrong idea. Security at federal courthouses is handled by the U.S. Marshals Service, which notes that “obviously, weapons are prohibited” there, and “other items that would be disruptive” are also banned, so that would apply to undefused items. But I don’t see any specific rules on this. Probably they assume it goes without saying.

But what if you need to bring a bomb into court as an exhibit? Well, you almost certainly don’t. But if you think you do, you better call courthouse security and discuss it with them first. Otherwise—even if it has been defused—there’s likely going to be a problem. See, e.g., “Note: Closing-Argument Exhibits Should Not Include Hand Grenade” (Dec. 1, 2009).

The Patna report concludes: “Police say they are investigating whether the bombs were defused correctly before being brought to court,” and I don’t want to rush to judgment but the answer is probably no.

Do Englishmen Still Have to Show Up for Longbow Practice?

Officials Say Pumpkin-Wearers Not In Compliance With Helmet Law

Man Who Attempted Suicide Sues Hospital That Saved Him