"People may not understand why," said Sheriff's Capt. Greg Bean, "but an armored vehicle is almost a necessity now."

Here's why he says he needed one: 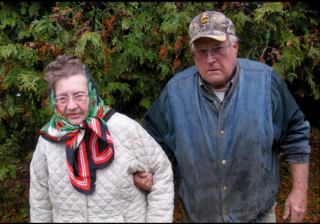 Looks can be deceiving, though, and in any event the man, at least, certainly looks very angry. So maybe we can assume that he was considered dangerous and—

"[Bean] also said that while [he] was never considered dangerous, he was known to be argumentative." 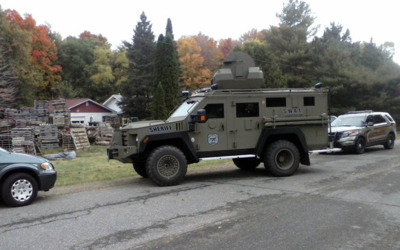 According to the Milwaukee Journal-Sentinel (both photos by Ryan Lister), the armored car was sent as backup for the 24 armed officers that had already been sent to the not-dangerous-but-known-to-be-argumentative man's home. The reason for the commando operation: to collect on a civil judgment.

Roger and Marjorie Hoeppner live in Stettin, a tiny town outside of Wausau in Marathon County, Wisconsin. According to the Hoeppners' lawyer, his clients and the town have been litigating for years over the stacks of wooden pallets and other junk in the Hoeppners' yard, some of which you can see above to the left of the urban assault vehicle. (Mr. Hoeppner has a pallet-repair business and restores antique tractors, the report says.) In 2010 the town claimed Hoeppner was not complying with a settlement, and took further legal action. A judge found in its favor, and after fines, legal fees, and a failed appeal, by October 2 Hoeppner owed the town about $80,000.

Neither the report nor the appellate opinion suggest that, up to this point, any of this was unfair to the Hoeppners. They stipulated to a contempt judgment and had agreed to do certain things, and apparently just didn't. If that happens, at some point the sheriff will get called in to enforce the judgment. This is not about that.

This is about the 24 officers and the tank.

Armored car, technically, but it does have the extra-scary turret. And according to Cap'n Bean, that's why they need it: to scare people.

Bean also said the armored truck was summoned only after Hoeppner initially refused to come out of his house. Once the truck appeared, so did Hoeppner.

"I've been involved in about five standoff situations where, as soon as the [armor] showed up, the person gives up," saving time, money and increasing safety, Bean said.

This was followed by the "an armored vehicle is almost a necessity now" quote, so this seems to be why he believes it's a "necessity." But he had already admitted that Hoeppner was "never considered dangerous," so even if that argument held water in other cases, it doesn't here. If he's saying that cops need an armored vehicle so they can intimidate even people they do not consider dangerous, well, that seems like a good reason they shouldn't be allowed to have one at all.

And remember why they were at the Hoeppners' house: to collect a judgment. The Hoeppners hadn't committed a crime, they just owed money. I've never actually had to try to collect a judgment, and I understand it can be difficult—sometimes you have to seize and auction assets, garnish wages, or stuff like that. But apparently the city [correction: it's much more likely that the police were responsible for the tactics—the city had been pretty patient overall] didn't want to bother with all that:

Bean said deputies had to handcuff Hoeppner because he was not following all their instructions, but did eventually agree to pay the $80,000 judgment after a visit to a bank — accompanied by deputies.

Wait—they arrested him, drove him to the bank, and stood there while he withdrew the cash from his account? Is that legal? Somebody help me out here. Because it sounds kind of like robbery.