The organizing committee of next year’s World Cup, a tournament in which teams from around the world apparently compete in games of something the committee called “soccer,” stated today that they would seek heavy fines for anyone caught streaking during the tournament. The statement was apparently prompted by incidents of streaking during the recent Confederations Cup tournament, in which one out of every four games was plagued by streakers.

The committee is seeking to have a new law passed in Germany, where the World Cup will be held, to authorize the fines, because currently there is no penalty in Germany for spectators who run onto the field. Apparently thinking that the threat of indecency would not be sufficient to spur the German legislature to action, today the committee’s vice president voiced the fear that one or more of the streaking incidents might turn violent. “You can’t assume these so-called streakers will always have peaceful intent,” he said. “We don’t want to imagine, for example, what would happen if one had a knife.”

Nor do we want to imagine, for example, where one might hide a knife. 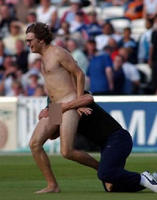 Even less would I want the job, seen here, of having to frisk a potentially dangerous streaker-terrorist in search of the knife, Uzi, dynamite, or fertilizer-and-diesel-fuel bomb he might have hidden away in that undisclosed location.

I am currently unaware of any streaking incident that has actually involved violence, except for last year’s Super Bowl incident in which a naked man at the 50-yard-line doing moves from “Riverdance” was flattened by a Patriots linebacker. To me, that is the kind of thing we should encourage, not prohibit, but I guess I don’t have the correct post-9/11 mindset.

Is the Government Tampering With Witnesses in No-Fly Trial?