Fed up with noisy visitors, the city council of Sullivan's Island, South Carolina, appears likely to pass an ordinance that would make it illegal to, inter alia, hoot between the hours of 11 p.m. and 7 a.m. or at any other time when said hooting or similar conduct would "annoy or disturb."  The final vote on the measure is set for today (July 20), and the measure would take effect on August 1 if it passes. 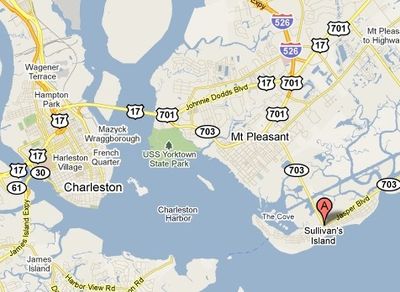 The ordinance states that "it shall be unlawful for any person to yell, shout, hoot, whistle or sing on the public streets, particularly between the hours of 11 p.m. and 7 a.m., or at any time or place so as to annoy or disturb the comfort or repose of persons in any office, or in any dwelling, or other type of residence, or of any persons in the vicinity."

Town administrator Andy Benke was quoted as saying that the law was necessary to help maintain the "quiet family atmosphere" on the island, which is occupied by about 2,000 residents year-round but is subjected to periodic invasions of as many as 3,000 mainland yay-hoos during the summer.  Evidently, a percentage of said yay-hoos are prone to hooting in the nighttime, and the town government would like to put a stop to that.  Violation of the anti-hooting measure would be punishable by a fine of up to $500.

"There are places you can go and be loud and vociferous," Benke said. "Sullivan's Island is not one of them."

He's not kidding, based on a review of the rest of Chapter 14 (Offenses–Miscellaneous) and especially the sections about noise.  Section 14-15 makes it unlawful to create or assist in creating any "unreasonably loud or disturbing noise," and a very specific and non-exclusive list of such noises is provided.  Among them:

Apparently somebody in the Sullivan's Island government really doesn't like the piccolo, because it is the only musical instrument that is specifically named in that prohibition.

Also, presumably there is an exception to the "crying, calling or shouting" prohibition if you are calling for help, but we will have to see how they apply it.

Robbers “Overly Prepared,” Says Guard Who Chased and Sat on Them