"TSA defends frisking of baby at KC airport," reads the headline of this item, and really they had me at "TSA" but I'm glad I kept reading. 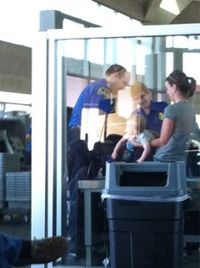 I don't know how I missed this picture, since it has apparently been tweeted thousands of times since Saturday, but as you can see it shows a TSA officer patting down a suspected terrorist baby at the airport in Kansas City. According to a TSA spokesman, who I assume drew the short straw and so had to come out and defend a baby-frisking, the screeners were just following standard procedure after the baby's stroller set off the explosives detector. And because this is the TSA and we are a nation of lunatics, standard procedure in that situation is apparently to check the baby and not the explosives detector.

Once the screener was satisfied he wasn't dealing with an IED (Infant-shaped Explosive Device), he allowed the baby and mother to travel. But a nearby citizen had already taken the picture and posted it on Twitter, thereby getting 15 minutes of fame and probably also a move right to the top of the no-fly list.

Seriously. One of the many TSA criticisms I hadn't gotten to yet is based on the report last month that one of the "behavioral indicators" TSA uses to identify "high-risk passengers" is whether a person complains about airport security procedures. According to CNN, it obtained a list of 70 such indicators, and one of them was "Very arrogant and expresses contempt against airport passenger procedures." First of all, they aren't our procedures, they're yours. If they were ours, they wouldn't include baby-groping. More importantly, and I realize this is probably not in the training manual, we have a right to express contempt for whatever we want. So suck it.

The report describes the "hubbub" over the search of an 8-month-old as similar to that surrounding last month's story about the pat-down of a 6-year-old in New Orleans. To me a "hubbub" is what you'd get if somebody claimed they saw a Jonas Brother at the mall, but I looked it up and the definition does include a "noisy turmoil," "tumultuous assembly" or even a "riot." I'd like to see some actual tumultuous assemblies protesting the continued security nonsense, but three hundred thousand tweets is at least a step in the right direction.