Because it sounds a little like "there's a bomb on board," which is very different.

The pilot of a Southwest Airlines flight learned this the other day when he managed to panic a number of passengers when trying to wish someone's "mom" a happy birthday. Passengers who thought they heard him say "there's a bomb on board" (or maybe, "we have a bomb on board") freaked out, although it's not clear to me why they thought the pilot would be wishing the bomb a happy birthday. How would he even know when the bomb's birthday was? Most bombs don't live more than a year anyway, do they? If one did, seems safe to say it would've failed to do the one thing for which it was created, and it probably wouldn't want anybody to call attention to that, really. Spare it the public birthday greetings and just let it drink in peace, is that so much to ask? Jesus.

The real point, of course, is that people really should try to relax at least a little and think briefly before they panic. Even if he did say "there's a bomb on board," how is panicking going to help? If freaking out and running up and down the aisle could help defuse a bomb, then I've been defusing bombs the wrong way, that's for sure.

On the other hand, I guess I've found unreasoning plane panic very amusing in the past: 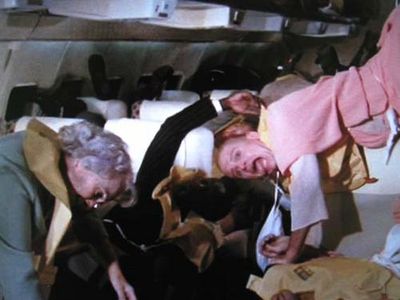 Passengers who have just been told to "assume crash positions."

Two of the panicky passengers on the Southwest flight complained after the plane landed, but the FAA has said it is "not investigating the pilot or the flight crew" for the failure to enunciate.

Although he may have gotten it from me via Twitter, I'll still go ahead and credit Bruce Carton at Legal Blog Watch, who included this in Volume 13 of his important series, "Things You Can't Do on a Plane."

Whereas, South Florida Should Become the 51st State