Speaking of the Supreme Court, before the debut of the Hat the big news was that Justice Thomas had astounded the legal world by actually speaking during oral argument. As it was his first utterance in nearly seven years, pundits immediately began punditing as to exactly what Thomas had said, what it might mean, and, if it was a joke as many believed, whether it was funny.

The revised transcript, released Wednesday, resolves at least some of these questions.

As you may recall, the question being discussed in Boyer v. Louisiana (not the main issue) was whether the defendant's court-appointed lawyers had been qualified to represent him in that very serious case. Justice Scalia—leading the witness—asked whether it was true that one lawyer was a graduate of Yale Law School and another was a graduate of Harvard Law School. Yes, that was true, the lawyer replied. "Son of a gun," exclaimed Scalia upon hearing the answers he already knew. "Very exceptional," the lawyer continued. Next, Justice Sotomayor started to ask a question, and it was at that point that the Words were delivered:

JUSTICE THOMAS: Well, there — see, he did not provide good counsel.

The initial speculation was that Thomas was taking a shot at Yale Law, from which he graduated but which he is known to not like very much. But my feeling was that because a reference to Harvard had intervened, it was unlikely that the Words were intended to relate back to the mention of Yale. I think the revised transcript makes it even clearer that the Harvard reference was the true antecedent of the joke: 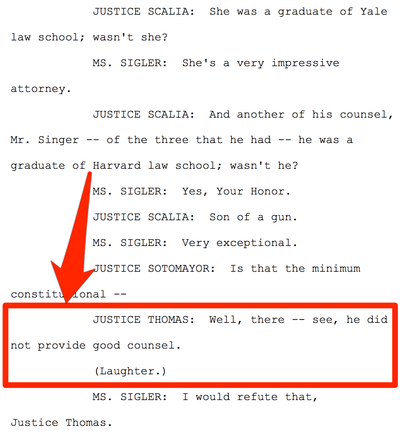 Also, according to the new report Carla Sigler is also a graduate of Harvard, which explains her statement that she "would [like to] refute" the suggestion that a Harvard grad would by definition not provide "good counsel." Of course, she could conceivably have been referring to Yale, too, but Yale was the antecedent then everybody's timing was way off. Clearly, the better explanation is that Justice Thomas was mildly bagging on Harvard, not Yale.

Reuters notes that the revised transcript also confirms that although Thomas did speak, the Words did not constitute a question. Therefore, it remains true that Justice Thomas has not asked a question during oral argument in almost seven years.

If You Have Any Claims to the Pyramid, Now’s the Time