After years of puzzling over it, I think at last I understand the TSA’s strategy for dealing with terrorism: make them laugh so hard they’ll all have strokes or something.

Yes, it has publicly sought crack security personnel by advertising on pizza boxes, closed down an airport because of an unscreened baby, swabbed a 95-year-old man for explosives, got all concerned about holiday snow globes, and insisted that those who drive historical-canal-boat-pulling mules get high-tech biometric ID credentials, among many other acts of otherwise inexplicable stupidity.

But the true explanation didn’t really dawn on me until recently, when I saw that a TSA agent at JFK “mistakenly shot himself and five other agents with pepper spray” because he thought the canister was a laser pointer and decided to horse around with it.

Hopefully this gag will take out al Qaida’s current No. 3 guy without doing too much collateral damage.

The New York Post seems to have first reported this incident, which happened on March 26. According to the Post, the “bumbling TSA agent” found a small canister on the floor. Thinking it was a laser pointer, he tried to turn it on, thereby managing to incapacitate himself and five others as well as halting security checks at JFK for at least 15 minutes. The six were taken to a hospital “out of an abundance of caution,” but were not injured. Surprisingly, no travelers were either exposed to the spray or accused of being responsible for the assault. 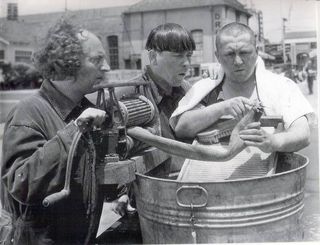 The TSA did, however, arguably lie to ABC News when it asked for a statement. “Officers were examining an abandoned item to determine its contents and to move it out of harm’s way,” said a spokesperson, “when it accidentally discharged.”

First, as we have seen before, these people have no law-enforcement authority and are not “officers,” although they do like to dress that way. Second, note how the sentence, especially the phrase “it accidentally discharged,” puts all the blame on the item. Perhaps the agents had roped off and secured the area and were carefully examining the mysterious canister with state-of-the-art scanning technology before taking appropriate action?

“They were playing around with it,” an airport official told the Post.