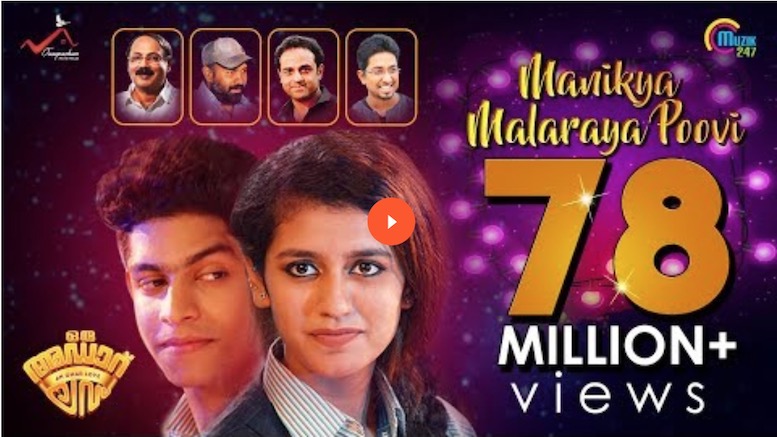 India’s Supreme Court has dismissed a blasphemy charge against Priya Prakash Varrier, an actress accused of winking during a movie. (She was in the movie, not watching it, making the accusation only slightly less dumb.)

Having covered previous orders by this court, the most surprising thing to me about this one is that it’s less than 500 pages long. See, e.g., “Luxuriate in the Octopoid Embrace of These Legal Postulations,” Lowering the Bar (Feb. 15, 2017). In fact, it’s only nine. But then this was just a panel ruling on a writ petition filed to seek an early dismissal. (I’m sure there’s a good reason this was being handled by the country’s highest court, I just don’t know what it is.) In any event, the relative shortness of the ruling means you can expect to finish reading it during your lifetime, so it’s embedded below.

But first, some background. The Times of India reported that the initial complaint was filed by a Mr. Muqeeth Khan of Hyderabad, who alleged that Varrier’s wink, which she committed during the song “Manikya Malaraya Poovi” in the movie “Oru Adaar Love,” was an outrage that “offended the religious sentiments of his community.” The song is apparently a version of a semi-traditional Muslim folk song. According to the police report (the “first information report” or “FIR” mentioned in the order), Khan claimed that winking during the song violated Penal Code section 295A, which says this:

Whoever, with deliberate and malicious intention of outraging the religious feelings of any class of citizens of India, by words, either spoken or written, or by signs or by visible representations or otherwise, insults or attempts to insult the religion or the religious beliefs of that class, shall be punished with imprisonment … for a term which may extend to three years, or with a fine, or with both.

How did a wink allegedly do this? The reports I’ve seen aren’t clear about that, and clarity is not to be found within the pages of an Indian Supreme Court decision, that’s for sure. But I think it’s not too hard to figure out.

Her highness the great Khadija

Who lived like a queen in the holy land of Mecca

She called upon the Seal of the Prophets

To take charge of her trade caravan

At the first sight of him

Desire and longing filled her heart

When the blessed Messenger of God returned

She sought his hand1

Khadija was Muhammad’s first wife. She had been widowed twice and then became a successful merchant. As the story goes, she hired Muhammad to handle a caravan to Syria, and apparently they really hit it off, because after he got back she proposed to him. He accepted. So that’s what the song is about.

A version of that song appears in the movie (which I have not seen yet but in my defense I still haven’t seen Deadpool 2), and this YouTube video—which has only been viewed 78 million times—is presumably from the movie. In the video, which takes place at a high school or equivalent, a group is performing the song to a room full of students. During the song, a boy and a girl look at each other across the room. Then, they waggle their eyebrows at each other. Then, she winks at him. He blushes.

It’s two kids flirting while they listen to a song about the romance between Khadija and the Prophet. Get it? It’s an allusion, or whatever. And if you missed the blasphemy in all this, good for you, because there wasn’t any. The objector didn’t have a problem with the song itself, just the female winking during it. (Eyebrow-waggling, by either sex, seems to be acceptable.) But that objection is especially bizarre given the historical context. Khadija didn’t just wink at Muhammad, she proposed marriage. And then they got married. And they had children. And none of this is controversial. It’s not like The DaVinci Code, where the idea that a prophet might have had a human relationship of some kind is considered a disturbing secret that must be kept for millennia at any cost. They fell in love and got hitched! They had kids! And it was her idea!

Anyway, the court dismissed the charges. Its phrasing was weird, as always, but the reasoning is solid—even if a wink could be blasphemous, the law requires a malicious intent to insult someone’s religion, and that was absent here:

On a keen scrutiny of Section 295A …, we do not find that the said provision would be attracted in the present case. We are inclined to think so, for the picturization of the said song solely because of the ‘wink’ would not tantamount to an insult or attempt to insult the religion or the religious beliefs of a class of citizens.

Therefore, go ye and pound sand, O accuser of blasphemy. Ye shall not find it here.

See also “Indian Warrant for American Gigolo,” Lowering the Bar (Apr. 26, 2007) (noting indictment of actor Richard Gere for “obscenity” after he kissed a local actress at an event).

1 I should say that this is my own meta-translation, which is a word I just made up meaning “I don’t speak a word of whatever language this is, but I read a bunch of English translations and this summarizes what I think those are trying to say.”

These Are Their Data: How Every Law & Order Episode Ended