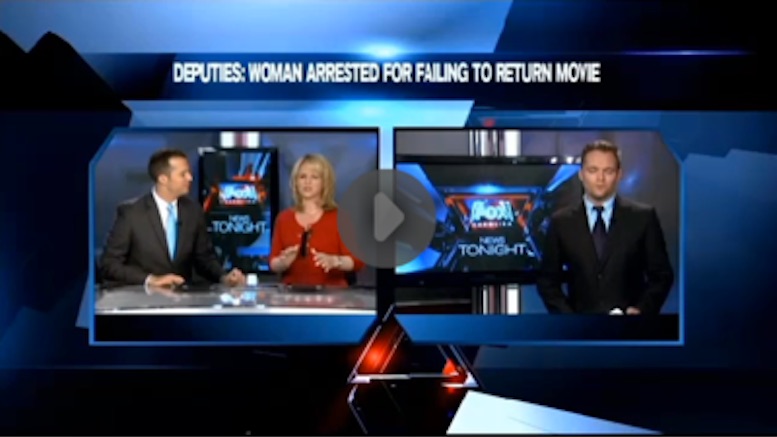 These three mistakes combined led to her arrest and criminal charges for the nine-year-old offense of failing to return a rented video.

On Friday, Finley learned that when you interact with the police for whatever reason, they will likely run a check on you. She may have known that, but was at least surprised to learn that in her case this turned up an outstanding warrant. The video briefly shows the warrant, which was indeed issued in Pickens County in September 2005 for failing to return “1 VIDEO, [NAMELY] MONSTER-IN-LAW….” Finley was definitely surprised to be arrested for this dastardly offense, let alone to be charged almost a decade after the alleged crime. She vowed to fight the charges.

The report calls this incident “crazy,” and it is, but not for the reason you might expect.

First, it is of course wrong not to return something you rented, even if that thing is Monster-In-Law. Finley was charged with violating section 16-13-420 of the South Carolina Code, which criminalizes a “failure to return leased or rented property” within 72 hours after the agreement expires. The State would have to prove she did this “wilfully and fraudulently,” and it would be a misdemeanor because the value of the rented item (if any, in this case) was less than $2,000. But this is in fact a crime.

But of course you already know this if you have been reading Lowering the Bar which has provided at least three prior cautionary tales of similar import, two of which involved library books and one a DVD (House of Flying Daggers). Not much of a crime, but it’s a crime.

Second, though, in this case nine years have passed. What about that? The sheriff’s position appears to be that he had to arrest her, given the outstanding warrant and that (according to the report) warrants don’t expire. That may be true, but what about the statute of limitations? Surely it bars prosecution of something like this after nine years. Well, it would. But South Carolina doesn’t have one.

We all “know” from TV that there is no statute of limitations for murder, and that’s often true for other serious crimes. But there is almost always a limit for minor offenses and even most felonies, generally based on ideas like (1) witnesses’ memories fade over time and (2) after years on the run maybe the culprit has suffered enough. But according to this guide by the South Carolina Judicial Department, South Carolina has no general limitations period for any class of criminal offense. (This article agrees, and says it’s the only state other than Wyoming where that is true.) The guide notes that in “very rare” cases, a limit may be included in a specific statute, but the only one I can find is for bad checks, and even that says only that “[n]o warrant … [may] be obtained more than 180 days after the date the check was [written].” That wouldn’t limit prosecution on an existing warrant, no matter how old, but it’s something.

A charge of failing to return Monster-In-Law in South Carolina, however, will haunt you for life.

Finley can likely fight the charges successfully on the grounds that there is no evidence she acted “wilfully” or “fraudulently,” since there almost certainly isn’t. One witness who likely won’t testify against her is the video-store owner; even if he cares, the FOX reporter noted that they hadn’t been able to contact him because the store has been closed for years. This provides a great example of why it is a good idea to HAVE A STATUTE OF LIMITATIONS for things like this, but apparently two states feel differently. It’s hard to see what they gain from that policy, other than the ability to hold some hearings on ancient and minor offenses before (almost certainly) dropping the charges in every case. Seems like they ought to change it.

I admit I didn’t think about the limitations issue when I wrote about the library books George Washington never returned. In that case he had the advantage of being dead by the time it came up, but New York’s statute of limitations would have gotten him off the hook regardless. I guess you can ignore the rest of that post then.