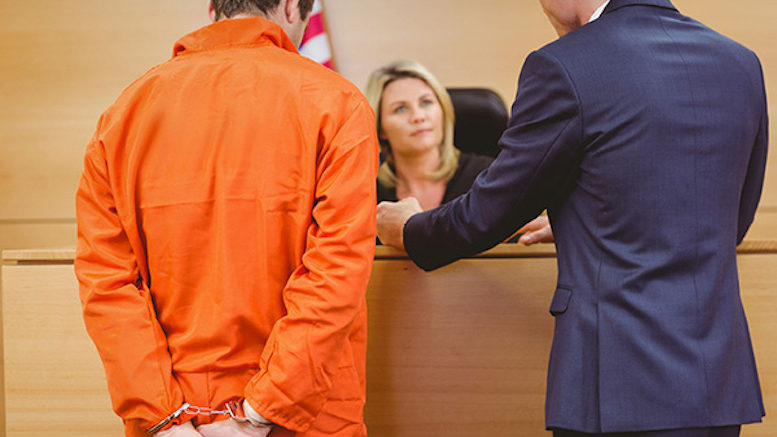 Two guys in court (image: the kind of stock photo you use when you've given up trying to find something relevant)

Good work in court today by Daniel Jones, who’s facing a murder charge in Syracuse, New York. Criminal defendants sometimes try to fire their appointed lawyers for strategic reasons, and some of their claimed justifications for doing so are better than others. See, e.g., “Defendant Holds Himself in Contempt” (June 28); see also “Rick & Morty Read the Denver Allen Transcript“(July 27). And not surprisingly, they don’t always go about it in the most—what’s the word?—professional way. See, e.g., id.; see also “Fourth Lawyer Not Yet Stabbed With Pencil in Trial of Man Who Stabbed Three Lawyers With a Pencil” (Apr. 30, 2012).

Jones’s approach was both less painful and less unique than the pencil-stabber’s: he accused his lawyer of lying to him repeatedly. But it was unusual in the sense that he asked his lawyer for help in remembering what those lies had been:

When asked by a judge to describe a lie [that his lawyer had told him], the suspect suggested that he’d been misled about the weapon used in the May 14, 2015 murder….

In court today, Jones, 32, turned to his lawyer to remind him of more lies.

“What else? You remember?” Jones asked his assigned lawyer, Ira Pesserillo.

Jones wasn’t deterred. “What else? What else you said?” he asked his lawyer, who remained silent.

The exchange led to chuckles in the courtroom. Even Jones chuckled, though he added quickly, “It’s not funny, but…”

But what, Daniel? It was funny. And just FYI, a good question to ask yourself when considering a possible legal argument is, “will I personally laugh out loud when I say this in court?” Hint: If the answer is yes, you should reconsider.

Jones had other arguments to make, but they didn’t fare any better. Well, in a way they did—although the judge didn’t think any of Jones’s arguments had merit, he “said he was tired of listening to his gripes. ‘I’m going to make the change just to shut you up,’ the judge told Jones.” So, while you shouldn’t count on a judge giving you what you want just because he or she is sick of listening to you, occasionally a filibuster of this kind does work.