Judge Merrick Garland, who I just realized shares a name with the Elephant Man, has now been waiting (as of August 4) 142 days for a vote on his nomination to the U.S. Supreme Court. This is longer than any other nominee in history has had to wait (and his wait is by no means over), and so congratulations are sort of in order. 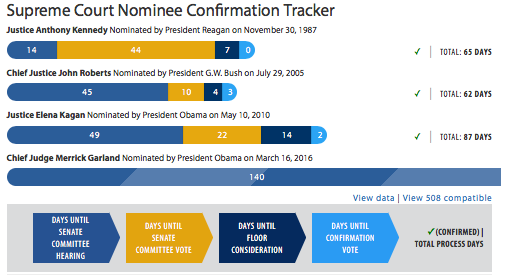 It was a couple of weeks ago (obviously) that Garland’s total hit 126 days, one more than the previous record-holder, Louis Brandeis. Brandeis was nominated in 1916 by President Wilson, and his nomination was bitterly contested. Some people saw him as a dangerous radical because of his record of fighting business and monopoly interests, and some people just didn’t like Jews. Brandeis was the first Jew ever nominated to the Supreme Court (though Judah Benjamin apparently declined potential nominations in the 1850s), and while there may not have been any explicit prejudice during the hearings, there was a lot of it going around.

One of the most bitter opponents of Brandeis’s nomination was Lawrence Lowell, or as this article describes him, “Lawrence Lowell, Harvard University’s virulently antisemitic President.” (Lowell later “became notorious for trying to place a quota limiting Jewish admissions to Harvard,” the article says.) The president of the New York Bar Association said Brandeis’s supporters were “a bunch of Hebrew uplifters,” which I guess he thought was a bad thing. And so on. Anyway, after lengthy hearings, and you can read the transcript here if you want but don’t because it’s super-boring, Brandeis was confirmed 47-22, 125 days after he was nominated.

Wikipedia has a sortable chart of all the Supreme Court nominations, which I spent a little time looking at because that’s the kind of thing I do. And now I’m going to tell you what I learned, because I also do that.

He who waited the third-longest period of time was Robert Bork, possibly about as far from Brandeis as you could get, ideologically, who waited 114 days in 1987 before being rejected 42-58. Was that a pleasant experience for him? Well, the Oxford English Dictionary now lists “to bork” as a verb, meaning “To defame or vilify (a person) systematically, esp. in the mass media, usually with the aim of preventing his or her appointment to public office; to obstruct or thwart (a person) in this way.” So, no.

Fourth place goes to Potter Stewart (108 days), although that was apparently because it was a recess appointment (that is, the Senate wasn’t in session at the time), not because anybody was borking him. He was confirmed 70-17 when the Senate went back to work.

Fifth: Clarence Thomas, who endured a very nasty attempted borking for 99 days, although he survived it (barely, 52-48). He did his best not to answer many questions during the hearings, which was good practice for not asking any questions from the bench. The 52-48 vote makes that one of the closest votes ever, but not the closest. That semi-honor goes to Stanley Matthews, who squeaked by 24-23 in 1881. He is said to have been a “controversial” nominee, but it wasn’t easy to find out why, so I guess he wasn’t really super-controversial.

What about the shortest wait for confirmation? Well, it’s a tie. In fact, 11 people are tied at zero days. Yep, there was a time when the President would send over a note, apparently, and somebody would make a motion and the nomination would be approved that very day on a voice vote. That hasn’t happened since 1945, though, when the Senate confirmed Truman nominee Harold Burton on September 19. I imagine no one was all that interested in saying no to a nuclear-armed Harry Truman at the time, though.

No one was very interested in saying no to George Washington, either. It took two days to get his first slate confirmed, but since that was September of 1789 he probably didn’t know the Senate’s address yet. Speaking of things he didn’t know, Washington had to withdraw one nomination just a day after he made it because he realized it was unconstitutional. William Paterson had been a Senator at the time the law creating the Supreme Court was passed, and Article I, section 6 says a member of Congress can’t be appointed to any civil office created during his or her term until that term is over. (It was intended to keep them from creating jobs for themselves.) Luckily, his term expired five days later anyway, and Washington nominated him again.

They were still working out the kinks back then, of course. Now, everything runs perfectly.