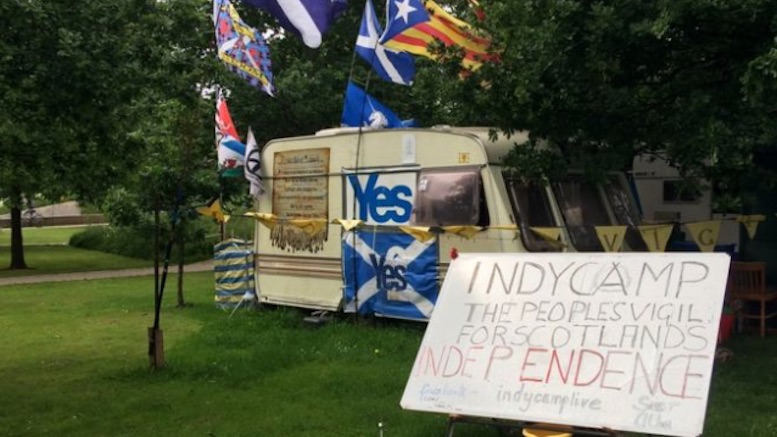 First they were denied the right to bring bongo drums to court (Sovereign Citizens Also Bothering Scotland (Mar. 28, 2016)), then they were prevented from offering critical evidence (IndyCampers Not Allowed to Call Queen Elizabeth to Testify (June 21, 2016)). Now, despite a personal appearance by Jesus Christ to support them in their hour of need, a Scottish judge has ruled against the IndyCamp protesters, holding they can no longer remain on Parliament grounds.

If Jesus is testifying on your behalf and you still lose, your case stinks.

As you may recall, the IndyCampers presented most of their arguments to Lord Turnbull back in March, and a couple months later he issued a thoughtful decision holding, for example, that the act creating Parliament did not conflict with the 1707 Treaty of Union. (That was probably the best one out of that group.) But showing remarkable patience, he said he would also hear argument on the question whether an order evicting them would be “proportional” as required by the EU’s human-rights laws. He did that in June, and finally issued his decision on July 27.

The “proportionality” determination involved looking at all the facts and deciding whether booting the campers off the lawn would infringe on their rights of free expression and assembly in a way that would be disproportionate to any trouble they might be causing. Lawyers for Parliament argued that the camp was interfering with others’ use of the  grounds, that the site is not a great area for a camp anyway (no utilities, and it sounds like Parliament wasn’t letting them have the key to its restrooms, either), and that vehicles and campfires have damaged the grounds. Also, the original message of the campers had been diluted, they said, because people supporting causes other than Scottish independence have also been hanging out there.

That last one was promptly confirmed by IndyCamp representatives who spoke at the hearing. One seems to have been reasonably coherent, and said he was there to support independence. But a second “lodged an affidavit in which he set out a history of litigation which he had been involved in concerning businesses in Glasgow … and had nothing whatsoever to do with the present case.” And then there was the third guy, who

advanced a fairly stark proposition. In short, his contention was that, contrary to the findings in my original decision, he and the others who occupy the camp have the complete right to do so. This time that assertion was based upon the contention that Jesus Christ in his second coming is within the camp and has granted his permission to occupy the grounds…. Having taken this stance [he] made no relevant submissions on the question of the proportionality of granting an order as sought.

Emphasis added. Now, you’re probably assuming he had no evidence to support the remarkable claim that Jesus was on their side. But you would be wrong. He had an affidavit—and he had Jesus:

This so-called affidavit bore to be from Christ on his second coming, it ran to eight typed pages and bore to be signed: “Christ—King of Scotland.” The author was present in court for at least some of the hearing and claimed in the body of the document to be the owner of the whole world and everything pertaining to it. It was also explained in the document that he had given the Indycampers his permission to occupy his land and buildings….

Emphasis added again. Jesus was actually there? I assume the affidavit was because the Savior had other commitments that prevented Him from actually testifying. Although it’s hard to see why you would ever need an affidavit in this situation—I mean, either you believe he’s Jesus or you don’t, and if you do, you aren’t going to worry too much about getting Him under oath.

Anyway, the fact that the affidavit asserted that all sitting judges are frauds and that “they and their fraudulent Queen were guilty of capital crimes and should all be executed” doesn’t seem like something Jesus would say, or something that a judge would be very happy to hear. And Lord Turnbull did point out that this “might easily constitute contempt” of court, but let it slide. He did point out, however, “the logical conflict between asserting to me that neither I nor the court had any jurisdiction, whilst at the same time asking me to apply legal rights in his favour.” Yeah, seems like they didn’t really think that one through.

Ultimately, Second Coming notwithstanding, the judge ruled that the order would be proportional, partly because the campers can still protest, they just can’t camp. This “may interfere with the respondents’ wish to conduct their vigil in the manner and form of their choosing but they are mistaken in considering that they have an unfettered right to make this choice.”

As of July 28, the campers were said to be “mulling an appeal,” and since an appeal would have absolutely no chance of success, I assume they will give it a try.

Maine Bill Would Allow One-Armed Men to Use Switchblades

“At First Blush, It’s a Lot of Money”