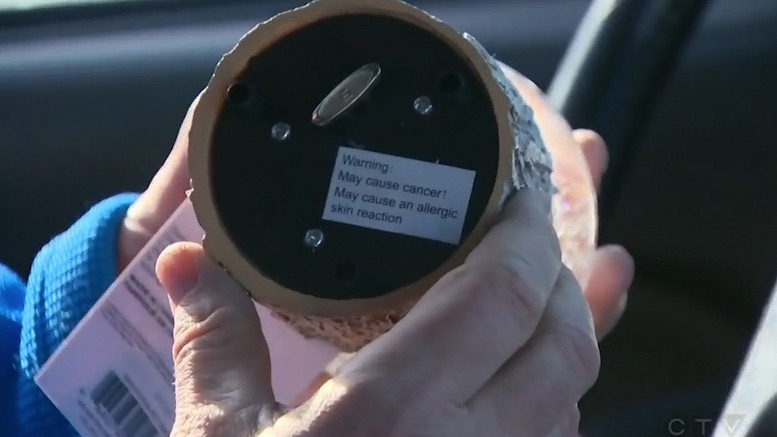 Luckily they are difficult to insert in sensitive areas (photo: CTV News)

Canadians shopping at Lowe’s recently were surprised to learn that the decorative snow globes they were holding might trigger an allergic skin reaction, or even cause cancer. Or so said the warning labels.

“Is it the paint?” one shopper wondered, apparently aloud and where a reporter could hear him. “Is it the liquid? Is it all of the above? Which cancer is it? …. [I]t brings up so many questions ….” Luckily, however, none of those questions need to be answered, because—despite what the TSA apparently once believed—snow globes pose almost no risk at all.

According to the BBC, the snow globe was invented in 1900 by an Austrian, Erwin Perzy. The BBC was wrong, though, because snow globes were already around by the time of the Paris Universal Exposition in 1878. So although Perzy may have come up with it independently, a different genius developed snow-globe technology first. Perzy did start a company to make the things, though, and his descendants still run it today, turning out about 200,000 schneekugel every year. They made the one in Citizen Kane, in fact. Yes, that one broke, but that was Kane’s fault. Secure your globe before you croak, like any responsible person would, and this won’t be an issue.

And the labels now perplexing Canadians don’t say anything about direct physical risks like glass shards anyway; they’re warning about some kind of chemical exposure. According to Lowe’s, while the glass in its globes does contain some lead, the level isn’t high enough to be toxic. It isn’t clear that lead causes cancer anyway, apparently.

What about the liquid inside? Well, that could conceivably be trouble. It’s apparently mostly water, but not enough to kill you unless you have a really tiny head. But at least some manufacturers add chemicals to thicken the water and so that the water won’t freeze during transit, and that could be dangerous to children, pets, TSA agents, or anyone else not smart enough to avoid drinking snow-globe water. But again, this doesn’t involve any risk of cancer, as far as I can tell.

So how to explain the presence of a cancer warning on Canadian snow-globes? Well, the reason turns out to be simple and semi-understandable—it’s California’s fault:

Lowe’s Canada spokesperson Valerie Gonzalo told CTV Calgary the labels are there to satisfy a California law that requires manufacturers to put warnings on products containing any of 800 chemicals that state deems carcinogenic, even if they’re found at safe levels.

Ah yes—that would be Proposition 65, a California law that requires warnings to be posted anywhere chemicals may be found that California believes may cause cancer or birth defects. (Disclosure: my firm defends Prop 65 cases occasionally.) The state keeps a list of these chemicals, of course. The first list, created in 1987, had 29 chemicals on it. How many are on it now? “Approximately 800,” according to the relevant state agency (which apparently isn’t sure? I counted 828 here). Now, lots of these are really nasty—pesticides, heavy metals, etc. It was news to me that “salted fish, Chinese style” is dangerous, but maybe so. It’s on the list, anyway. But even assuming everything on the list is in fact super-deadly, Prop 65 does not ban any of these things or even limit the allowable levels. It only requires a warning.

This is a truly odd approach for at least a few of the things on the list. For example, “certain combined therapy for lymphomas” and many other chemotherapy drugs are on the list. It’s true some of these can raise the risk of cancer. But since you aren’t taking them unless you’ve already got cancer, I’m not sure what good the warning is supposed to do. Also on the list: alcohol, cocaine, and marijuana smoke. ALERT: none of that is good for you. Engine exhaust is also on the list. It’s also everywhere, so are they supposed to put a warning on the outdoors?

This is the main problem with Prop 65: there are 800 or so chemicals on the list, many of them very common, and if a business doesn’t have a warning posted, it’s likely to get sued (that’s how the law is enforced). And because there’s no penalty for posting a warning that isn’t necessary, the safest thing is to post one. This means the warnings are everywhere in California, and I mean everywhere. See, e.g., “Stupid Warning Shows Up on Leprechaun Hat” (Mar. 20, 2014). And that in turn means nobody in California pays any attention at all. Except lawyers looking for somebody to sue.

Why are the California warnings on Canadian snow-globes? Either it was just a mistake, or the manufacturer decided it was easier to stick the warnings on all the globes instead of just those going to California. (California is such a giant market, it’s easy for us to bring others down to our level this way.) The good news, though, is that there’s almost no chance your snow globe will give you cancer. And no, we don’t represent snow-globe manufacturers, as far as I know.

Look, Just Because You Think of Something, You Don’t Have to Patent It