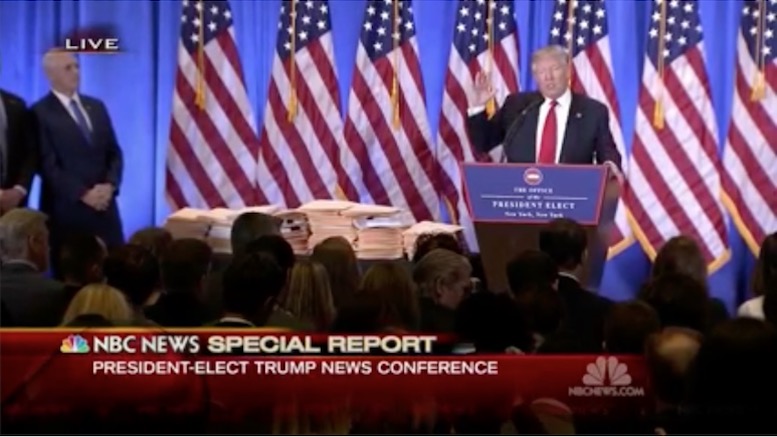 As you surely know, the stars of Donald Trump’s recent press conference were what looked like hundreds of file folders full of papers, which both Trump and his lawyer, Sherri Dillon of Morgan Lewis, said were “just some” of the paperwork involved in turning over Trump’s stuff to his sons to solve conflict-of-interest problems.

I don’t want to address here whether the legal plan they have described actually would solve conflict-of-interest problems, except that to the extent I understand what that plan is, I find the claim that it might solve those problems hilarious. But what I want to address is the equally burning question, to me, of whether there was actually anything in those folders other than blank paper.

Again, both Trump and Dillon said there was. According to the transcript:

Again, hilarious! But on to the mysterious papers.

Other than the statements above, to my knowledge there is no direct evidence as to what those folders contained. That is, we can see they contained sheets of paper, but the question is whether anything was printed on the paper. That we do not know, because despite the folders having center stage at the press conference—literally; the podium was off to the side a bit—no one outside the Trump team was allowed even a glance inside them. In the absence of direct evidence, or an admission, the claim that the papers were blank remains “unproven,” as Snopes.com says in its report on this. So there’s that.

First: they didn’t let anybody see inside the folders. You would not expect them to display anything privileged, of course, but the implication was that these were documents Trump signed for business purposes, and presumably at least some would be for public filing and so not privileged. Even if every document were privileged, it wouldn’t breach the privilege to hold up a document and riffle through it just to show skeptical reporters it had some writing on it. (You couldn’t hold it still or some jackass like me would take a screenshot.) The complete refusal to allow even a glance at any document is therefore very suspicious. 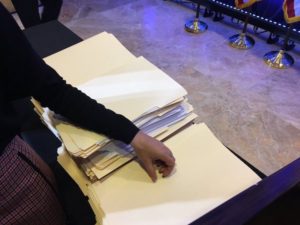 Second, as many have pointed out, none of the visible folders have a label or any sort of mark on them, not even a Post-It or other sticky note, and in fact they look quite pristine. As a practicing lawyer, I can tell you that we do not keep documents in unmarked manila folders, at least if dealing with more than a few. It seems highly unlikely that Morgan Lewis has large stacks of manila folders sitting around in its offices, and if somebody needs a particular document the only way to find it is for somebody to go through the whole stack until they get lucky.

Third, no writing or any other sort of mark can be seen on any of the papers themselves. I did not think this was conclusive, though, because as far as I know no more than a fraction of any page was visible. Maybe they just use really big margins. Also, one report speculated that these were unlikely to be legal documents because they clearly aren’t on legal-sized paper. But there’s no rule saying you have to use legal-sized paper for anything. I haven’t used it willingly ever, and I hate it, because it’s stupid. Why is it longer? If long paper is somehow better, why aren’t we still using scrolls? But anyway, this is not conclusive either.

Fourth, here’s what is conclusive, to me: none of the pages, so far as I can tell, have been stapled together. Many individual pages are individually aligned. This makes it impossible that a lawyer or anyone else at a law firm has been using these documents. They are unstapled.

Even if you did use the stacks-of-unlabeled-file-folders system of organization, and you don’t, there is no way in hell any lawyer would fail to bind together the pages of even a written draft, let alone a final document your client is supposedly going to sign in order to make major business changes. You don’t just print out all the pages of multiple documents and stick them in a binder, or leave them in a stack. Nor would you use a mere binder clip (a few of those are visible) for final documents. Never. These things are not done.

[Update: someone has just reminded me that a stack of any significant number of legal documents will virtually always exhibit “stack tilt” because of the cumulative effect of page fasteners. That is, the upper-left corner of such a stack is always higher. This is further evidence that Trump’s “legal documents” were unstapled, which, again, is compelling evidence they were all blank. I should also say that Sherri Dillon so far has not responded to my email asking for comment on the alleged blankness of the pages, although that is not at all surprising.]

In short, the circumstantial evidence is overwhelming that somebody on the Trump team created fake stacks of documents to which the president-elect could point when talking about his conflict-of-interest plan. (And it was an amateur—an expert would do a much, much better job.) This doesn’t mean there are no such documents, of course. Probably are, somewhere. But they weren’t in those folders.

So now you know.

Fight Breaks Out in Alabama Legislature