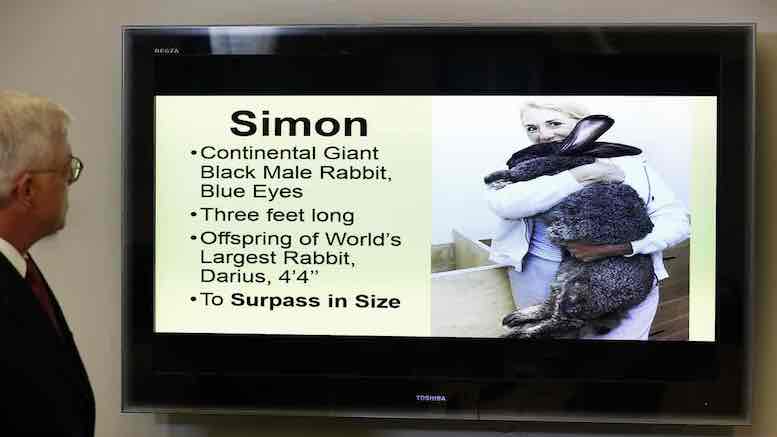 No, it’s about one rabbit.

Well, one giant rabbit. I’ll give him that.

The Guardian reports that on Monday, United Airlines said it had reached a settlement in the case of Simon, a three-foot-long rabbit who died after a flight from the UK to Chicago. This settlement was with the English woman who raised him, however, not with Simon’s owners, so there is more to come in this drama.

Simon was a Flemish Giant rabbit who lived most of his short rabbit life in Worcestershire, England, where he was raised by breeder Annette Edwards. Although Simon was one huge-ass rabbit—over three feet long and nearly 20 pounds at the time of his death—he was projected to become even huger, because he is the child of Darius, also raised by Edwards and listed by Guinness as the World’s Longest Rabbit. At 129 centimeters (4’3″) and 50 pounds, Darius was appropriately named after Darius the Great, third king of the Persian Achaemenid Empire, who ruled an enormous empire that included nearly half of the world’s population at the time, the largest proportion in history. Actually, I have no idea whether she named him after Darius the Great, but I think we can all agree that it would have been appropriate if she had. At a minimum, Darius was one giant frigging rabbit. 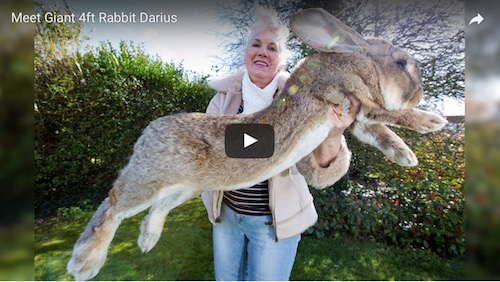 The claim that Simon would have outgrown his dad is plausible, though of course not certain. He was ten months old when he died, and the Flemish Giant apparently doesn’t reach full gigantitude until it’s about 18 months. But one group that definitely believes Simon would have become the biggest rabbit in all history has four people in it: the three guys who bought him and their attorney.

The three businessmen reportedly planned to enter Simon in the Largest Rabbit competition at the Iowa State Fair in August, win, and then make even more money exhibiting the monstrous creature at other events. Now, of course, that dream has ended. And when dreams end, litigation often begins.

According to The Guardian, the owners’ attorney, Guy Cook, said at a press conference that although United had settled with Edwards—its customer—it had not offered his clients any compensation. “Speaking in front of a large video monitor displaying a photo of the dead rabbit on its side in a large crate,” the report said, Cook did his best to gin up some outrage. “United has taken no action to rectify this,” he said, using a verb that lawyers enjoy more than “fix,” for example. He then started laying the groundwork for boosting the amount United might have to pay in rectification, insisting that “[t]his case is about more than one rabbit.”

Well, maybe and maybe not. PETA, at least, was quick to blame the airline for mistreating animals, but it remains unclear how Simon died. Rabbit experts told National Geographic that he could have died from travel stress, and some amount of stress is unavoidable. United says he survived the flight and died only after landing. It denied Cook’s accusation—based on anonymous sources—that Simon may have been accidentally locked in a freezer while waiting to catch a connecting flight to Kansas City. “Completely false,” a spokesman said, saying Simon was in a kennel facility kept at 70 degrees Fahrenheit. Cook also suggested that the pilots may not have been told about Simon and so did not heat the cargo compartment. In other words, he doesn’t know how Simon died yet, either, but he’s pretty sure it’s United’s fault.

Which, of course, is entirely possible. And United, true to form, has not done itself any favors in its post-incident handling of the situation. Specifically, it allegedly had Simon cremated without the owners’ permission, meaning there will be no autopsy that might determine a cause of death. There may have been a health-code-related reason for that (although they do reportedly have a freezer), but it does look a bit suspicious. Especially to attorneys on the other side, that’s for sure:

“It’s circumstantial proof that there was something wrong here that they cremated the remains of Simon without the consent of the ownership group or the breeder who provided the rabbit to the owners,” Cook said.

Well, it might be. Depending on the circumstances, destruction or “spoliation” of evidence can justify the inference, or a jury instruction, that the evidence would’ve been unfavorable to whoever destroyed it. But this could also have been inadvertent, or United may be able to take the position that its only responsibility was to Edwards. So it remains to be seen whether “cremating the remains of Simon” is really evidence of a coverup. Cook, needless to say, was not buying United’s version:

“United Airlines can issue any statement they like but their company’s credibility is under question when they immediately cremate the giant rabbit Simon without anyone’s consent,” [Cook said]. “They destroyed the proof.”

Cook reportedly demanded that United turn over security-camera footage that might show what happened, and, of course, is demanding an independent investigation into the giant rabbit Simon’s death and United’s animal-transportation procedures. (Can “Simon’s Law” be far behind?) His demand letter gives it until next week to respond.

United will likely settle this case, too, just as it did after that other unfortunate incident where it  re-accommodated a passenger so one of its employees could have his seat. Exactly how much this one might be worth is hard to say.

It apparently cost $2,300 to ship the giant rabbit Simon across the Atlantic, but the purchase price hasn’t been disclosed. And although I have in fact reviewed the rules of Iowa’s Largest Rabbit competition, it’s still not clear to me what the prize is. I have no doubt that Iowans would ante up to see the most ginormous rabbit to thump the Earth since the Pleistocene (or at least I assume there were titanic rabbits then), but future profits are notoriously hard to measure. Still, it would probably be wise for United to settle, assuming the demand isn’t too outrageous. After all, who knows what that security footage will reveal?

Finally, I’d like to thank The Guardian for providing my favorite new example of why hyphens are sometimes absolutely required, via its headline: “Giant rabbit owners seek United payout.” To the best of my knowledge, the owners are regular-sized.

Can a Convicted Felon Serve in Congress?

Alabama’s Ginormous Constitution Will Be “Recompiled,” Made Less Racist