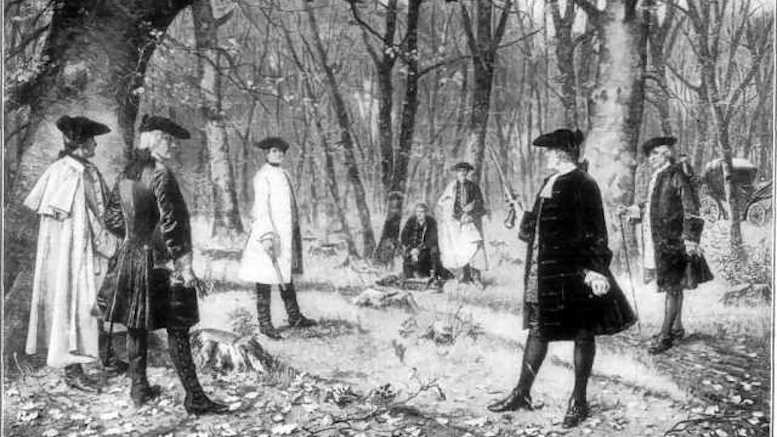 Dost thou desire a piece of me, sirrah? Thou shalt have it.

It looks like the people of Oregon will not have to decide, the next time they go to the polls, whether to repeal the 172-year-old state constitutional provision that was designed to discourage dueling. For about two months, a joint resolution was floating around up there that would have proposed the repeal of Article II, section 9, which says this:

As you can see, that doesn’t actually make it illegal to fight a duel. It just says that if you do, or if you help arrange one by carrying a message, you shall “be ineligible to any office of trust or profit.” In other words, kiss your political career goodbye.

That may seem like an odd way to go about it, but it didn’t back in 1845. In ye olden times, gentlemen of means would still occasionally attempt to resolve a disagreement or besmirching of honor by meeting at a suitable spot outside of town and proceeding, in a formal and gentlemanly way, to try to blow each others’ brains out. As almost all of you probably know by now, the most famous duel in U.S. history was the one between Aaron Burr and Alexander Hamilton in 1804, a duel that Hamilton did not win. But the practice remained sufficiently common over the following decades, at least among the political classes, that newly formed territories or states sometimes put provisions like the one above in their constitutions. Try to kill somebody, the provisions sternly warn, and you may have to get a real job.

I addressed this a few years back when Kentucky was considering a similar change, as you may or may not recall. The issue there was that even people taking the oath after passing the bar exam were still required to swear that they had never fought in a duel, and the guy who proposed the amendment said it was unseemly that people were snickering about that whilst taking the oath. The bill ultimately did not pass, however.

Oregon’s no-dueling suggestion first became law in 1845, when it was drafted and passed during the second session of the provisional legislature, and signed into law by (I guess) the provisional governor, all in the span of about half an hour. It’s easier to get things done, I imagine, when there are only 12 legislators. Not totally clear to me what these guys were up to, actually, since Oregon didn’t even become a territory, much less a state, until August 1848. But fine. (Not much got done right away, it seems, because only nine of the 23 legislators bothered to show up for the 1848 session—the rest were in California digging for gold.)

Senate Joint Resolution 44, which would have put the measure on the ballot, was sponsored by Sen. Brian Boquist, who said his motivation was not that he wanted to kill anybody, particularly, but just to make the point that there are a variety of archaic provisions in the state’s constitution and laws that should be cleaned up. That is true in almost every state, of course, and Oregon is no exception.

Was there any opposition? Yep. It came from the Oregon Progressive Party, which filed a letter objecting that (1) the resolution would “allow the candidacies of persons who give or accept challenges to fight duels,” and that is certainly true; but also (2) it would cost a lot of money to get this “obviously unenforceable” provision removed, what with having to print the ballots and process the results and whatnot. Seems like they’d be doing that anyway, but I guess it would cost a little more.

Whether this was the decisive blow or not (hint: not), it appears that the measure did not go anywhere. According to the report, all proposals had to either get out of committee by April 18 or automatically fail, and it doesn’t look like this one even got a vote. So, for at least another year, the anti-dueling provision will remain in place.

Even if it gets repealed, or if you live in a state with no such provision, you should keep in mind that dueling is still not a good idea. Winning might very well make you a murderer, and losing would, most likely, make you dead.