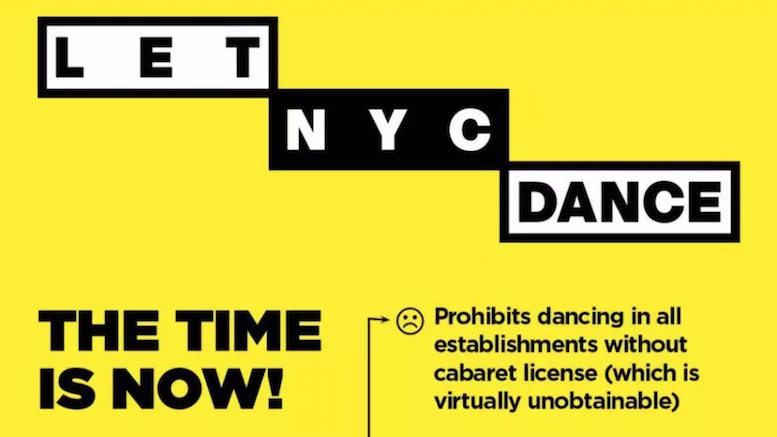 From a promotional flyer supporting the pro-dancing movement

As the New York Times and many other sources have reported, dancing activity surged this weekend based on reports that the city had finally repealed the 90-year-old law that prohibited the operation of a “public dance hall” or “cabaret” without a license. “There are now thousands of places where dancing is legal,” said Andrew Muchmore, who owns a bar where this sort of thing has apparently been going on for some time, and was going on again this weekend.

Most of you libertines probably didn’t even know this was illegal, but indeed it is, thanks to the bravery and moral leadership of the 57 men and one woman who, in 1926, took a stand against strange wildness and for common decency:

From the Report of the Committee on Local Laws in Favor of Adopting a Local Law to Regulate Dance Halls and Cabarets and Providing for Licensing the Same (Dec. 7, 1926)

Ever since the law took effect on January 1, 1927, therefore, it has been illegal to operate “a public dance hall” or “cabaret” in New York City unless the premises were licensed and operated in accordance with the anti-wildness ordinance, or as it came to be known, the Cabaret Law. The law defines these terms very broadly: a “public dance hall” is any place accessible to the public “in which dancing is carried on,” and a “cabaret” is any place “in which any musical entertainment, singing, dancing or other form of amusement is permitted” and food or drink is also sold—except for places “which provide incidental musical entertainment, without dancing, either by mechanical devices, or by not more than three persons.”

I struggled for a few minutes to come up with a way to construe the reference to “mechanical devices” to mean a ban on dancing robots, but I just don’t think it works. While that sentence of the definition should be taken out and shot, it can only mean that bars aren’t “cabarets” just because they have a jukebox or not more than three people on stage—as long as nobody dances.

As the excerpt above shows, the goal was to crack down on the unfettered wildness of the speakeasies and jazz clubs with which New York was infested during Prohibition. Your Committee was fed up with the scandal and annoyance, and the city council overwhelmingly agreed: the law passed 58-2. (I was for some reason disappointed to see that the only woman on the council, Ruth Pratt—who was in fact the first woman ever elected to that position—not only voted “yes” but was a member of Your Committee.) Some have argued the law was also an attempt to prevent interracial mingling in jazz clubs, many of which were in Harlem. There have certainly been accusations of selective enforcement over the years, and virtually any establishment could be targeted because in practice it has been so hard to get a license. As of last week, for example, the Times reported that out of 25,000 potential cabarets in the city, only 97 are licensed. All the others are at least potentially subject to prosecution, should an inspector find people dancing therein.

For various reasons, parts of the law have been struck down as unconstitutional over the years, and other parts have been amended. But its basic provisions have remained intact for almost a century—until last week, when the City Council finally voted to get rid of it. The decriminalization of dancing is what sparked the wildness reported over the weekend.

All of which was, technically, illegal.

Although the so-called “news media” doesn’t seem to be reporting this part, the new law, like most new laws, does not take effect immediately. It still has to be signed by the mayor, for one thing, but the legislation itself provides that the changes don’t take effect until “120 days after it becomes law.” (That’s right, it isn’t law until four months after it becomes law.) Assuming that’s measured from the date of passage, then the law would become effective sometime in February 2018. Until then, though, all but the 97 licensed establishments are allowing patrons to gyrate, or just quietly sway in place, at their own peril.

A couple of clarifications, though.

First, the peril is for the establishments, not the patrons. Dancing itself has never been illegal under the Cabaret Law, only operating a “public dance hall” or “cabaret” without a permit. This has at times had a chilling effect on dancing, of course, since a proprietor could be fined if customers happened to start dancing while an inspector was present and so would have a motive to discourage such activity. But the law applies to businesses, not the dancing public.

Second, there is almost certainly no real peril. Although the law hasn’t changed yet, what also hasn’t changed is that most people didn’t give a $*&* about this law to begin with, or didn’t even know it existed. It has been sitting on the books since 1926, widely ignored, but resulting in hassle for business owners and potential dancers and, almost certainly, serving as a convenient cover for discrimination or corruption from time to time because an official could always dust it off and use it. As I’ve mentioned before, there are lots of outdated and even flatly unconstitutional laws on the books, and only rarely do legislatures go through and clean up the code, something they should do more often. Congratulations to the NYC City Council getting rid of this one.

As of February 2018, at least. But again, that’s a technicality that should not deter anyone from grooving during the next 120 days.