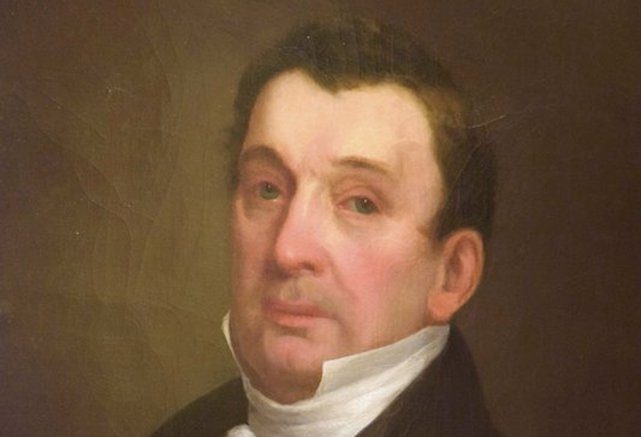 Have you seen this man? Hint: if you have, you have either visited the Massachusetts Supreme Judicial Court or you are, like, 200 years old. 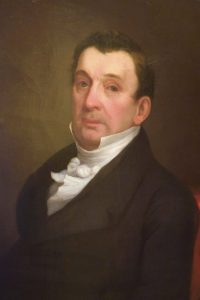 Full image, in case the cravat helps you identify him

The Associated Press reports today that the SJC is asking the public for help identifying the gentleman—if he was a gentleman—who is depicted in this portrait that’s been hanging in its courthouse for some large but apparently unknown number of years. According to the report, officials have been trying to identify this guy for more than a decade, with no luck whatsoever. Chief Justice Ralph Gants said he finally suggested trying to crowdsource it.

“I basically said, listen,” Gants told the AP, and people probably did, because he’s the chief justice, “if we have not been able to identify it, why don’t we set loose the public to see if they can put on their Sherlock Holmes’ hats and help us to track down who this elusive and mysterious justice is?”

Let me just stop right here and say that the AP, not Chief Justice Gants, is responsible for the atrocity that is “Sherlock Holmes’ hats.” He was being interviewed, not issuing a written statement, and unless we are going to start doing “air apostrophes,” which we aren’t, the person transcribing the interview (or his or her editor) is responsible for this kind of thing. There is virtually no scenario in which the phrase “Sherlock Holmes’ hats” should be written, except possibly at gunpoint (and I’d probably have to think about it even then), or to make fun of it, which I am doing now. (So, fine, there are two possible scenarios.)

The apostrophe is for making (1) a contraction or (2) a possessive. (The exceptions are so rare that let’s not confuse anybody by saying they exist.) “Sherlock Holmes’ hats” can’t be the former, so it must be an attempt at the latter. But a possessive is virtually always made by adding apostrophe+s, not just the apostrophe. There are basically only two exceptions: (1) a plural noun that ends in an s sound, or (2)—and I’m quoting a real source here—”some ancient multisyllabic names that end in a sibilant sound,” like Jesus, Moses, or Socrates. If that’s what you’re dealing with, no s, just the apostrophe. Otherwise, apostrophe+s.

But I think we can be pretty sure that this wasn’t Chief Justice Gants’s (!) intent. He was referring to the famous fictional detective Sherlock Holmes, who did, on occasion, wear a hat. He may even have had more than one hat. But those would have been “Sherlock Holmes’s hats.” The Chief Justice was clearly referring to similar hats owned by various members of the public, not by Holmes himself (even if they had once belonged to him, they now no longer would). In short, he was not using the possessive at all with regard to Holmes, he was using “Sherlock Holmes” as a phrasal adjective (i.e., “the Sherlock Holmes hats that I believe members of the public own”), and so the apostrophe just has no place there at all.2

Of course, you could write “deerstalker hats” and avoid all this, but that’s not what he said.

Oh, right—so, the Supreme Judicial Court has no idea who this guy in the portrait is. Gants said they have “essentially ruled out” all prior chief justices, but believe he was an associate justice sometime between 1780 and 1820. Of course, because they don’t know who he is, they don’t actually know whether he was a justice at all. They are simply reasoning that he “must have been” because his portrait is hanging in the courthouse.

That does seem like a fair assumption, but I kind of hope it turns out that somebody snuck in one night, took one portrait down and put up his own, and then took down the name plate. I’m sure he’d have told somebody about this great practical joke before he died, but maybe he was hit by a carriage or something.

Anyway, if you can reliably identify the man in the portrait, you will be invited to the courthouse for a guided tour and so you can pose for a picture with Chief Justice Gants as he unveils the mystery name. (Will they fly you to Boston? Almost certainly not. But I will give you $5, if that helps at all.) Please help if you can.

2 Yes, you would hyphenate it if it weren’t a proper noun, but it is, so you don’t. I don’t make the rules. But again, thanks for overthinking this with me.