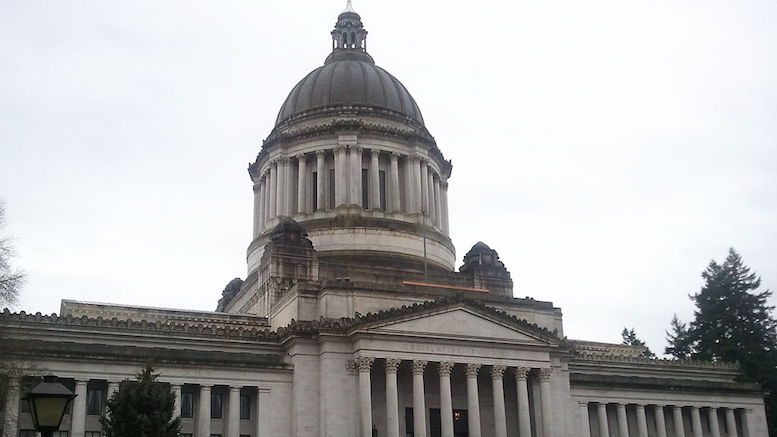 It smells okay from down here (image: Brianhe via Wikipedia)

It might be time to clean Washington’s state capitol building. As KOMO News has reported, while it normally gets cleaned once every five years, they skipped the 2009 maintenance in order to save money. (It costs a couple million to do this, according to the report.) So, it’s dirtier than usual, and has been for some time.

The dome has also started to leak, the report says. Leaks have been noticeable since at least 2004, and building managers are concerned the lack of maintenance is making them worse. They theorize that the “mold and grime that is accumulating on the Capitol” has widened existing cracks in the mortar, allowing water to get through. State Sen. Tim Sheldon (D-Potlatch) is quoted in the report as saying there would probably be legislative support for the cleaning effort, both for cosmetic and structural purposes. “The real issue,” he said, “is you need to take care of the cracks to prevent further damage to the building.”

Having said that, it may be getting kind of nasty in there as well. Not politically (as far as I know), but because of fungus.

This is based on the content of SB 6625, which Sheldon introduced today (March 1). Entitled “Requiring a study of filamentous fungi at the capitol dome,” the bill declares that though the dome is an “architectural wonder” and the tallest in North America, it is, “unfortunately, made slightly higher by a thin yet distinctly noticeable layer of fungi enveloping its entire surface.” If passed—and it unfortunately won’t be, if only because according to my source it was introduced after the cutoff date for this session—it would require a study of the dome’s “grey toupee” and what if any adverse effects it may have on legislators and tourists.

The bill would require the state’s Department of Enterprise Services to offer every legislator a chance to inspect the dome to see the “encroaching fungi,” lichen, and mold for themselves, to study the effect of said encroachers, and to report its findings by December 1. The study would have to include a survey of visitors entitled “You Likin’ the Lichen?” in addition to considering any potential health effects the encroachment may be having on legislators, such as “declining mental acuity” and the “loss of a sense of humor.”

This short bill, an excellent example of the genre, is reproduced in full below.

Yet Another Lawsuit About the Lack of Fruit in “Froot Loops”

Suspect Who Fled Into Lake Pursued by Officer on Paddleboard

Reminder: What Happens in Vegas May Not Stay in Vegas