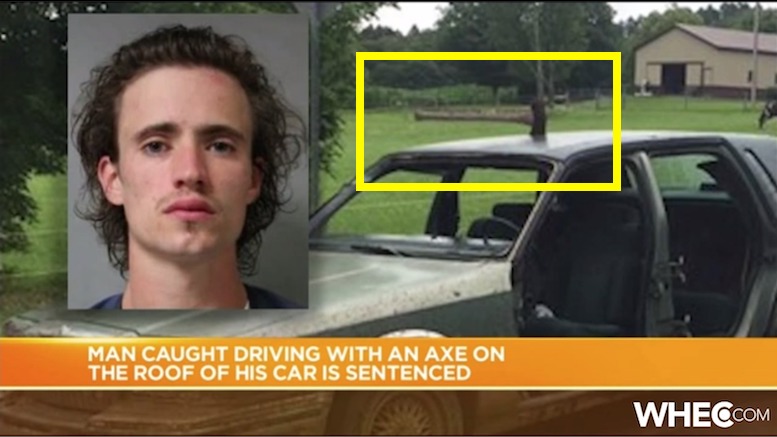 Doors are apparently optional there as well.

But here are some things that are illegal in New York, based on the fact the same guy was charged with all of them in connection with that single incident:

And here are some other illegal things: burglary, violating a protective order, contempt, larceny, resisting arrest, criminal mischief, and attempted escape. Because he did those the following week:

Price was arrested on Friday [Aug. 4] when police responded after he broke a protection order. He fled the home but was found by a state trooper nearby. The investigation that followed led to him being charged with burglary, criminal contempt, and attempted petit larceny.

In addition, Price was not cooperative during his arrest, at one point kicking out the rear door window of a patrol car in an attempt to escape. As a result, he was further charged with resisting arrest, criminal mischief, and attempted escape. Police say Price also bent the rear seat in order to access the wiring.  This caused damage to the patrol vehicle in excess of $3,000, according to police.

That was actually the second time he had violated the protection order—the first time was on July 18, just four hours after it was issued. And two days after that, he was arrested on marijuana charges, although who cares.

Five years of probation, but that’s still a perplexingly light sentence even if he did plead guilty to … well, to some permutation of those many charges, I’m not going to figure that one out. Especially given the apparent need for a protective order, and his tendency to ignore it, under what scenario does it not seem like Jared should spend at least a little time indoors?

In some place where he can’t get hold of an axe?

Maybe even more perplexing, though, is this: I have read maybe a dozen reports about Jared’s exploits, and so far as I can tell, not one reporter has ever asked him what the deal was with the axe. Not that his explanation was likely to make any sense, but I’d have enjoyed reading it.

His probation would theoretically expire in 2023, but I’m sure he’s already violated it.