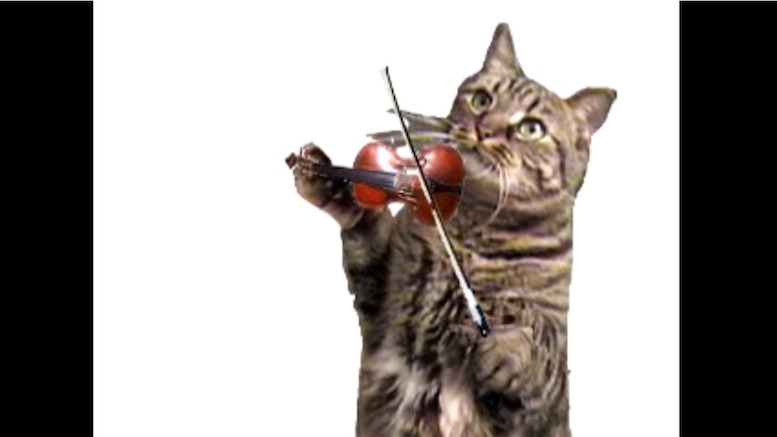 This one's playing "Happy Birthday," but it's still not something I'd put up with

This was originally just going to be a line item in an “Assorted Stupidity” roundup, but after research revealed it involved a picture of a cat playing a violin, the Editorial Board (me) voted (unanimously) to escalate. So we are now at DefCon Two on this one.

While the exact criteria are classified, I can say that DefCon Two status almost always results in a separate published post. (DefCon One, of course, is reserved for extreme situations, like when a lawyer’s pants catch on fire during closing argument, or somebody argues that a guy being kept in a freezer is not dead, but rather “in deep meditation.”)

The Oregonian reported last month (this is via Above the Law) that a Portland lawyer had been arrested for allegedly firing several shots into the office of another lawyer, which, as an expert on legal ethics, I can tell you would almost certainly be regarded as a violation of Rule 8.4(b). It is also a crime, even if you don’t hit anybody, which thankfully was the case here.

It was close, though, because there was an employee in the office at the time of the shooting (7 p.m.), and she was close enough to the target area to be hit by what were apparently pieces of drywall. Though the report seems to suggest that at the time, she thought it was just exploding drywall:

The worker who was inside during the shooting told investigators she was cleaning in preparation for a new employee starting the next day when she heard something hitting metal, and then was sprayed by white powder and debris that came from the wall. She later saw two holes in a window and window shade and realized they were bullet holes, the affidavit said.

I’m sure that’s not quite what happened, but it sounds too much like the “defective oil cans” scene in The Jerk for me not to mention it. “Ha! This drywall’s defective! It’s springin’ leaks!” Anyway, it turned out to be bullets.

How does one get to the point of firing bullets into another lawyer’s office? Well, we have enough info to piece together a rough timeline of how this escalated:

That comment has left the Editorial Board seriously considering going to DefCon One.

I have to say that, without knowing the content of the first two messages, things seem to have been escalated to a surprising degree by the cat-playing-a-violin email. I assume this was meant to indicate a marked lack of concern about Hogan’s complaints, a position sometimes expressed by a gesture known as “playing the world’s tiniest violin.” This generally doesn’t involve a cat, but the internet is known for adding cats to everything, so that seems like a fair assumption too.

In any event, the much more surprising escalation, of course, is from emails to bullets. It is slightly less surprising here given that Graeff is said to be a former Marine Corps sniper (no offense to former snipers in general, I hasten to add) who is already under investigation by the Oregon Bar for allegedly shoving a former client against a wall. Also because (and this is why the case is back in the news just now) during a Feb. 28 search of the alleged shooter’s home, police reportedly found evidence that he was making meth in his basement.

Again, both probably violations of Rule 8.4(b), a rule of which lawyers really should be aware.