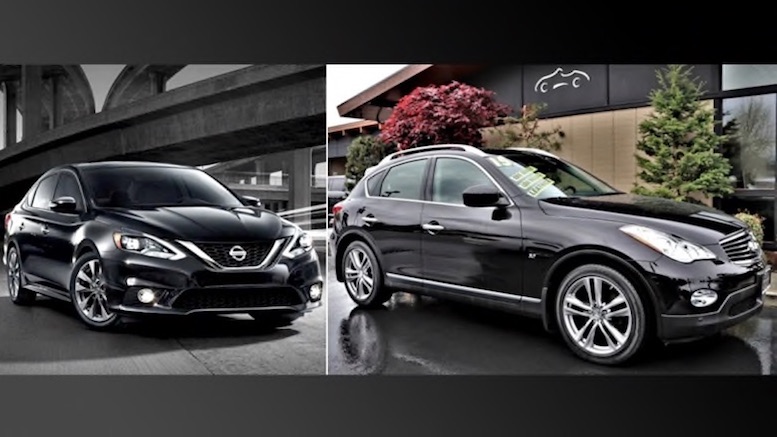 The Nissan is on the left

The CBC reports that a stolen black Infiniti QX50 was recovered last week when the elderly woman who took the vehicle returned it. Well, more accurately, she took it to an Enterprise Rent-A-Car location in Ontario and started complaining to the manager about the condition it had been in when she picked it up. “She was upset because the ashtray was dirty, there were papers in the glove box, and there were golf clubs in the back,” a constable said. “And she was giving the manager the business on renting her a dirty vehicle.”

This puzzled him, because they had never rented an Infiniti QX50.

They did rent Nissan Sentras, however. In fact, records showed they had rented a black Sentra to someone about two weeks earlier, and that car still had not been returned.

And coincidentally, it turned out, they had also rented a car about two weeks earlier to the owner of a black Infiniti QX50. Who, the manager recalled, needed to rent a car at that particular time because his QX50 had just disappeared from the parking lot of a local Walmart.

Eventually, these dots were connected.

It turned out that the woman had rented a black Sentra, and then drove it to Walmart to do some shopping. When she came out, she got in the wrong black vehicle and just drove away. She was able to do this because, like her Sentra, the QX50 had an electronic key fob, and the owner had accidentally left his fob inside the car.

The woman then drove around town for the next two weeks in the wrong vehicle, and though there were papers in the glove box and golf clubs in the back and an extra key fob that wouldn’t work in that vehicle, and it wasn’t the same vehicle, none of this seems to have tipped her off that anything was amiss. She apparently refused to believe this, in fact, until the manager actually drove her over to the Walmart and showed her the Sentra she had rented, still sitting there in the parking lot.

Ontario police posted the story on Facebook, saying that the woman would not face any charges and reminding people not to leave their keys or key fobs in the car.

I took “accidentally steals” from the CBC’s headline. It’s true enough for a headline, but of course an honest mistake like this one seems to have been would not be “stealing” at all. That requires an intent to deprive the owner of property, and among the things this woman seems to have lacked was intent.

For a somewhat different exception to that rule, see this 2012 item in which a woman drove off in a car that someone had left running in the parking lot of a bank. Turned out the people who left it running were robbing the bank at the time. They had planned to use the car for a quick getaway, a plan she foiled by stealing the getaway car. That really wasn’t stealing either, though, because they had stolen the car from someone else to begin with. And I guess they were in no position to press charges anyway.

As a reminder, the getaway driver is supposed to stay in the getaway car so things like that don’t happen.