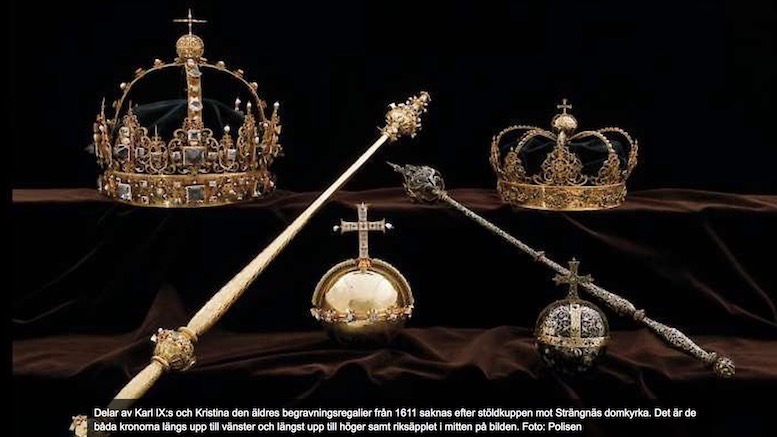 Well, sooner or later it had to happen.

Not stealing Swedish crown jewels, although I guess if enough time passed, that’d be pretty likely to happen too, just statistically speaking. But I’m talking about somebody committing a crime and then successfully escaping via water.

But on Tuesday, two thieves managed to pull it off—or, at least, as of Friday morning, they still had not been found. And not only did they escape (at least for now) by water, they did so after stealing royal treasures from a cathedral, which means they are evading a manhunt of significant proportions. Still, I think this is the exception that proves the rule, because the circumstances are anything but ordinary.

The stolen royal stuff once belonged to King Charles IX (1550–1611) and his second wife Queen Christina (1573–1625), most notable as the parents of the fairly bad-ass Gustav II Adolf. Charles and Christina are buried in Strängnäs Cathedral, which is west of Stockholm and on the coast of Lake Mälaren. 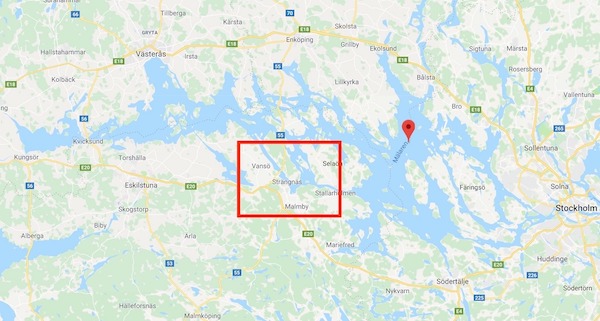 This is the third-biggest lake in Sweden, and one of the biggest in Europe, covering about 440 square miles and even more square kilometers. It has lots of islands and little inlets that look perfect for hiding boats. And maybe best of all for those of you thinking about trying to escape through it, so far as I can tell there is not a single shark or alligator living in it, although I am not promising you wouldn’t get eaten by something.

Most importantly, these guys had a boat. One with an engine.

The thieves brazenly entered the church on a day when it was open to the public, though it may have been closed for lunch. (Or, as Google translated this page: “At lunchtime on Tuesday, Strängnäs Cathedral was exposed to a cheeky stalemate.”) They smashed open the display case—Charles and Christina aren’t on display, just the jewels—grabbed two crowns and an orb, then jumped on bikes and rode a short distance to the shore, where they jumped into a waiting speedboat. They motored off across the lake, and so far, have not been found.

According to Swedish source Aftonbladet, blodspår kan knytas till misstänkt gärningsman, which apparently means that one of the suspects cut himself during the robbery and left some blodspår behind. Aftonbladet reported that the blood “can be linked to a person” who lives north of Stockholm, and that police had searched the house already but found nothing.

Police professor and/or criminologist Leif GW Persson, who for some reason is presented very dramatically in this clip and so may be some kind of celebrity, told Aftonbladet he believed the heist was a professional job that someone hired the thieves to carry out. He pointed out the items would be worth a great deal to the right person, but would be very hard to sell otherwise because they are unique objects. “Going to the mortgage bank with such a well-known item is not something that the thieves could imagine,” Google claims he said, so it was likely “an ordering job.” He expressed the hope that the thieves would not just melt the items down and sell them for the precious-metal value, though he thought that was unlikely becaues they are worth so much more as is. “If you melt them down,” Persson said, according to Google, “you’re stupid in your head.”

And he did not think the thieves were stupid, because they had escaped on bicycles and then by water, which under the circumstances gave them a much greater chance of escape. Again, those circumstances were very unusual here, as water escapes go. For more than one reason, you should not try to do likewise.

But if you do, a boat with an actual engine is highly recommended.

UPDATE: As of January 30, 2019, the items had still not been recovered. But two suspects had been arrested, so my general point is still valid.

Philippine Police Warned Not to Walk Too Gaily