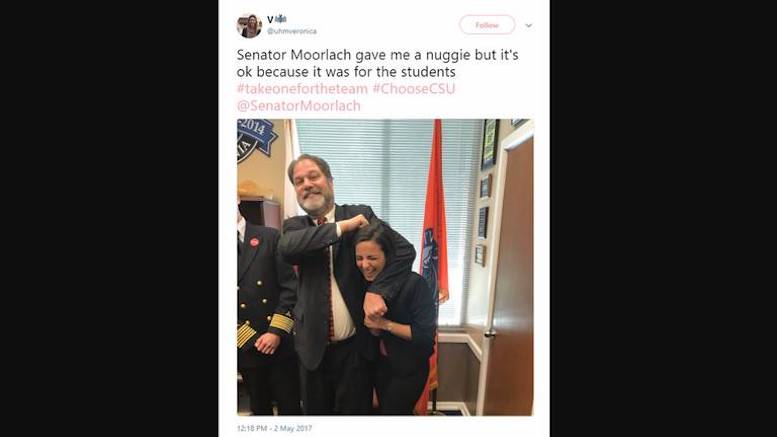 "We found evidence that Moorlach has given other individuals 'noogies,' which he acknowledged." –California Senate Rules Committee

Responding to a letter of reprimand from the California Senate’s Rules Committee, Sen. John Moorlach (R–Costa Mesa) apologized this week for delivering an unwelcome noogie to a woman during a photo op. Moorlach said he would follow the committee’s recommendation that he no longer engage in what he admitted was a long-standing noogie practice.

The report also says the woman alleged Moorlach “put her in a headlock” before delivering the noogie, although that obviously is redundant as the headlock is simply the first step in the process.

According to the report, Moorlach “told investigators he frequently engages in noogies,” and pointed out that he is well-known for doing so. And indeed, pictures of the senator delivering noogies can be found on social media. (The image above is one of those, and does not depict the incident that resulted in the complaint.) While it appears that no one has complained until now, in this case the noogie made the target feel sufficiently uncomfortable that she filed a complaint.

For whatever reason, it has been difficult to find actual copies of the complaint, the reprimand letter, or Moorlach’s statement online, so I am relying on excerpts. Presumably the complaint alleged some form of harassment—and let’s be fair, a noogie would qualify as “some form of harassment”—but the committee found no reason to believe it was sexual harassment in this particular case. It was, however, unwelcome:

While Moorlach did not have any sexual intent or other ill-intent toward Complainant, Complainant credibly described the impact Moorlach’s conduct had on her. She did not know Moorlach and had no prior interactions with him. She considered Moorlach’s decision to suddenly grab her at a professional event to be “assault.” [Well, “battery” would be more accurate.] Her reaction to the encounter was not unreasonable.

While we find that the conduct occurred, we note that Moorlach did not intend to make Complainant uncomfortable. We found evidence that Moorlach has given other individuals “noogies,” which he acknowledged.

The committee recommended he cut it out.

Moorlach did apologize, though it was measured in nature. “I am a fun-loving individual who is guilty of occasional playfulness,” he said in a statement. “I apologize for giving a ‘noogie’ to someone who requested a photo. It was done during a light-hearted moment with others present. However, I will discontinue this innocent and gregarious behavior in the future.”

The letter also reportedly states that “Moorlach has previously been warned for inappropriate touching, specifically poking an employee in the stomach.” It is not clear whether he agreed to stop doing that as well.

While an alleged noogie delivery is hardly the worst scandal one can suffer, it has resulted in negative consequences before. In 2008, as you almost certainly will not recall, three FBI agents were fired after an investigation into an alleged noogie one of them delivered to a federal prosecutor. It was not clear from that report whether the circumstances involved “horseplay, bullying, or harassment,” though it could well have been relevant that the noogie-deliverer was male and the deliveree was female. (Let us also recognize that delivering a noogie to any federal prosecutor, or I suppose any prosecutor, is not recommended.) But as I pointed out then, it also appeared that the agents may not have been entirely truthful about what happened, which would mean that as usual, the coverup was worse than the scandal itself.

Google Maps Made Me Walk Onto the Highway, Woman Claims