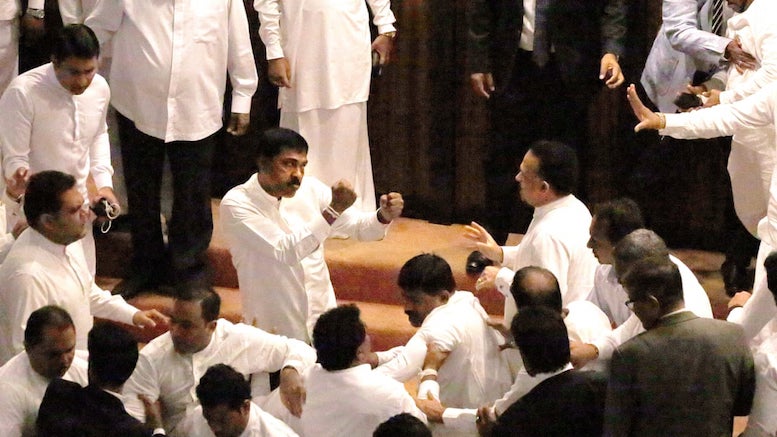 As I’ve noted several times before, for a reason I don’t fully understand I find it hilarious when members of a legislature get involved in physical brawls. See, e.g., Taiwan (2007), South Korea (2008), Ukraine (2010), Turkey (2014). I probably shouldn’t, but I do. And I am not by any means alone in this, as I know from your feedback but also because, as I am somehow just now learning, there is an entire blog devoted to nothing but parliamentary fights. Since 2007, in fact, the aptly named parliamentfights blog has been chronicling these farcial events, beginning with a blurry video of some pushing and shoving in the Russian Duma and continuing right up to the incident last week that I’m going to comment on today.

The unnamed authors of that blog usually just post a video without many additional details, but still they are doing an important service, so I salute them.

The most recent parliamentary combat broke out in Sri Lanka,  apparently sparked by the president’s sudden decision to fire the prime minister and replace him with someone else. As The Guardian reported on November 16, the parliament was disrupted for two days by scuffles, chair-hurling, and allegations that some lawmakers threw chili powder into others’ faces. One MP was reportedly seen “wielding a knife” on the first day of the fighting, but it appears he didn’t actually stab anybody with it.

This is the first chili-powder-throwing incident I’m aware of, but that isn’t what makes this parliament fight so remarkable as far as I’m concerned. Because this is the first time at least to my knowledge that one lawmaker has actually injured another by hitting him with a copy of the constitution:

Outside the chamber, MPs Gamini Jayawickrama Perera and Vijitha Herath could be seen rubbing their eyes, with splotches of chilli splattered across their robes.

“They have behaved as beasts, not as human beings,” Herath told reporters outside the chamber.

He wore a large bandage across his forehead, saying he was injured when an opposing lawmaker lobbed a copy of the Sri Lankan constitution at his head.

Now, you may well laugh at the mental image of a legislator being hit in the head with a (presumably bound) copy of the constitution. I certainly do. But in this case the potential risk is greater than you might think, because the Sri Lankan constitution is (depending how you format it) over 130 pages long, not counting the attached lists, schedules, and appendices that add another 20 pages or so. A 150-page bound volume of that constitution could do some serious damage, even if it was only “lobbed” at you (and that’s probably not the right word for what happened). Actually, 150 pages might hurt even if they weren’t in a bound volume, but they’d be a lot harder to throw.

Still, if you’re going to get hit with a constitution you’d be better off in Sri Lanka than in the country with the world’s longest national constitution—and it should be in no way surprising that the country is India. See “Luxuriate in the Octopoid Embrace of These Legal Postulations,” Lowering the Bar (Feb. 15, 2017) (discussing the astoundingly long-winded and impenetrable legal writing of the Indian Supreme Court). Formatted the same way (and these are courtesy of the Constitute Project, which provides the full text of 193 national constitutions for your reading pleasure), India’s constitution is 207 pages long, with 11 attached schedules that add another 56 pages. The related Comparative Constitutions Project says Sri Lanka’s constitution has 40,085 words and that India’s has a whopping 146,385, so I suspect India might have tinkered with the font or something, but either way that is one big-ass constitution. (For comparison, the U.S. Constitution is less than 8,000 words long.) Not only is India’s constitution the longest in the world, it is more than twice as long as the second-longest constitution (Nigeria’s).

In any event, apparently a mere 40,000-word founding document can physically injure a lawmaker, and there are 26 constitutions bigger than that. You definitely don’t want to get hit with any of those.

Because I’m sure you want to know, the world’s shortest constitution is Monaco’s, which is appropriately teeny at just 3,814 words. (Somehow, the government of Lesotho used 45,532 words, though they probably have to keep most of them in another country for lack of space.) And while India’s constitution is ginormous, that’s only the world’s longest national constitution. The longest constitution in the world can apparently be found in a place you might not expect: Alabama.

Yes, the U.S. state of Alabama most likely has the longest constitution in the world. According to this 2012 article, as of January 1 of that year the document weighed in at an estimated 376,006 words. But back then it had only been amended a mere 850 times. Checking it now reveals that since then there have been another 78 amendments. It has 287 actual sections, but Alabamians have heaped on another 928 amendments, covering everything from income tax to education to domestic law and, of course, the all-important Amendment 387, Operation of Bingo Games by Nonprofit Organizations in Madison County. At this point many of the amendments are amending previous amendments, so, frankly, it seems like well past time to just start from scratch.

And maybe try to slim the new one down a little. Luckily, the only recent legislative brawl in Alabama (at least to my knowledge) is this 2007 incident that involved only a single punch. Had even the 2007 constitution been lobbed during that battle, someone could easily have been killed.

On the other hand, even then it was probably too heavy to throw.