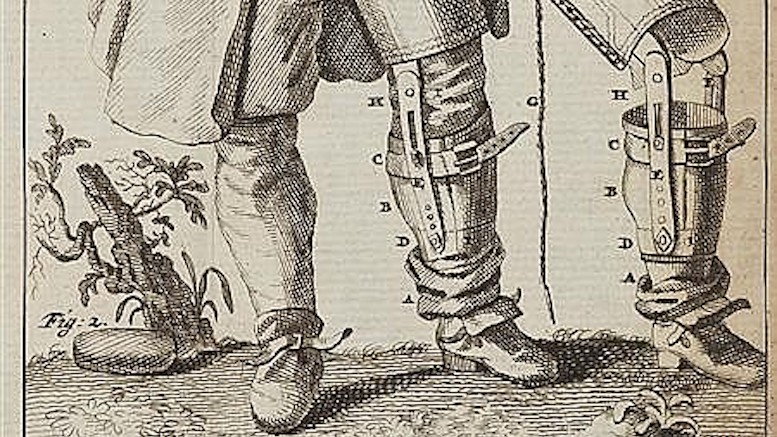 The Verduyn Prosthesis, which was presumably used to beat its owner c. 1690

Based on my data—and I’m fairly confident I have the most comprehensive data available on cases in which a man has been beaten with his own prosthetic leg by an angry girlfriend—this happens approximately once every seven years.

This phenomenon first came to my attention way back in 2005, when it happened in Michigan. See “Man Beaten With Own Leg by Leg-Wielding Girlfriend” (Aug. 17, 2005). I was then, as I am today, sensitive to the fact that despite the alignment of the parties, this sort of thing is still domestic violence, something that is not funny except in extremely limited circumstances. In that case, I listed one of the required criteria as “the leg is a spare one, so he can still flee and thus avoid serious injury.” As you will see, I later decided that one isn’t absolutely required, but the circumstances are still pretty limited.

Almost exactly seven years later, a second case occurred in Florida. See “Second Man Beaten With Own Leg by Leg-Wielding Girlfriend” (Sept. 12, 2012). In that one, the gentleman’s ex-girlfriend (still counts) showed up at his home demanding custody of their two-year-old son, of whom he likely had custody because she was a convicted felon. And she plainly had not become less felonious since their relationship ended. She grabbed the boy out of a window and put him in her car, and when the man leapt into the back seat to recover the child, he unwisely left his legs sticking out of the door. This allowed his ex to seize the weapon thus presented and commence beating him with it.

He really should have known better, because as he told reporters, this was not the first time she had beaten him with his own leg. “Probably two or three times she’s done it,” he said. “Just a way to get the upper hand,” he continued, apparently in all seriousness.

Unlike the previous victim, this gentleman managed to recover his leg from the assailant, but she then escalated the matter significantly by producing a shotgun. Consistent with the criteria mentioned above, the humorous part of the incident ends at that point. But happily, no one was seriously injured, and police quickly located and returned the boy.

The most recent incident is a few months ahead of schedule, which I’m going to attribute to global warming rather than some flaw in my seven-year-cycle theory.

This one takes us to Louisiana, where last week a 58-year-old woman was charged with aggravated battery of a boyfriend with the boyfriend’s prosthetic leg, or maybe those are the aggravating circumstances rather than a definition of the offense. According to the report, the two had been engaged in an “off-and-on” relationship for several years, and it appeared to be “on” for the evening of February 11. The couple went to the woman’s home, where they began drinking gin. At some point, police said, the man told her that he wanted to end their relationship and date another woman. He then decided—and this decision can only be explained by gin—to go to sleep in a bedroom of the home belonging to the angry, intoxicated woman with whom he had just broken up, presumably after removing a roughly club-shaped prosthetic appendage and leaving it next to the bed where someone who came in to glare at his unconscious form could easily see it.

Did he later wake up with injuries? Yes he did. But he woke up, which to be honest is probably more than a man who has made such a poor decision has any right to expect.

I was a little concerned for my seven-year theory upon finding this article, in which the author lists 10 other incidents between 1998 and 2014 in which prosthetic limbs had been used as weapons. But after reviewing them, I was relieved to find that none of them meet my criteria. In fact, most of them involved someone using his or her own prosthetic limb as a weapon, or at least trying to. And while one of the incidents sounds pretty funny—at least if you think a drunken Scottish woman angrily swinging her artificial leg around in the cabin of a plane after the crew refused to give her a parachute is funny, and I do—that’s still a different category.

We will discuss this subject again in 2026, assuming I am still the official chronicler of such incidents at that time.

If You Don’t Pay This Tax, We’ll Kill This Dog