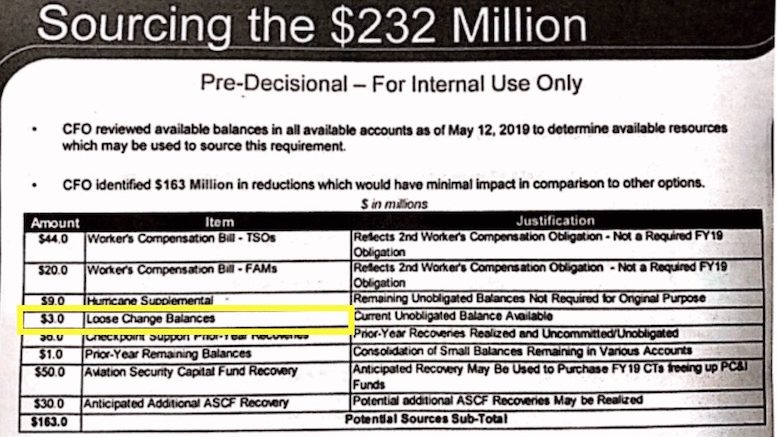 Does that say $3 million in "loose change"? Yes. Yes it does. (TSA PowerPoint slide)

You know how they keep asking you in the airport security line whether you’re absolutely sure you got everything out of your pockets?

There might be more than one reason for that.

According to recent reports (such as this one by NBC), the Department of Homeland Security—apparently just scraping by on the $50 billion or so we pay it every year—is desperate for even more cash. Specifically, it has asked Congress to give it another $1.1 billion so it can, as the slide below put it, “support the humanitarian crisis at the Southern Border [sic] that is increasingly threatening to become a full-blown emergency.” 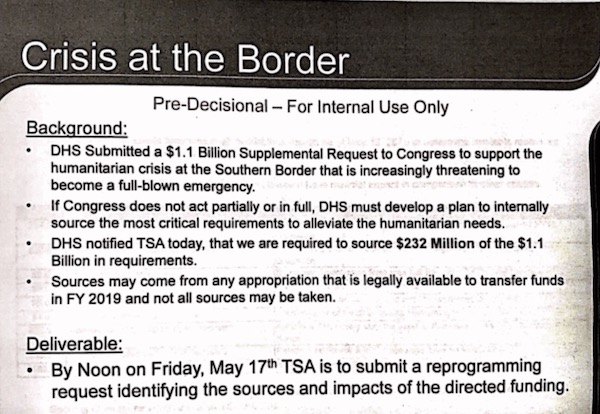 That’s an interesting statement for three reasons: (1) the Freudian slip suggesting DHS needs money to “support the crisis,” not to help the people stuck in it; (2) the admission that, although the president declared this to be a national emergency three months ago, it still isn’t one; and (3) the evidence that maybe No One in this administration can capitalize Words correctly. What is up with That?

Anyway, the slide above was actually created by our old friends at the Transportation “Security” Administration, which is of course part of DHS. And as you can see, the TSA is concerned because its big brother told it that if Congress doesn’t come through with the extra cash, DHS will have to find it somewhere, and if that happens TSA’s share of the total is expected to be $232 million.

Well, TSA itself is barely scraping by on the $7 billion or so we pay it, hence the concern. Where is TSA going to come up with $232 million to help support the border crisis that is threatening to become a full-blown emergency? Good question. Other leaked slides show that it’s considering a number of options, including $64 million in (deferred?) workers’ compensation payments, $50 million sitting in an “aviation security capital fund,” $9 million in “hurricane supplemental” funds it apparently didn’t find a way to spend, and $3 million in “loose change balances.”

Hold on—what was that last one?

It turns out—and this isn’t new, but it was new to me and so I assume to at least some of you—that TSA is legally allowed to keep all the loose change travelers leave behind in airport-security bins. Though I think most people do a pretty good job of cleaning out their bins, enough people apparently do not that TSA currently has $3 million in loose change sitting in its piggy bank(s). I understand that it’s not going to be able to reunite travelers with the loose change they may leave behind, but I guess I’d have expected the money to be donated to some good cause.

The problem of what to do with the traveling public’s loose change seems to have arisen not long after the agency was created. In 2004, Congress passed Pub. L. 108-334, which provided that “unclaimed money recovered at any airport security checkpoint shall be retained” by the TSA and spent on “civil aviation security” operations. See 49 U.S.C. § 44945. Before that, the money was most likely retained by whichever TSA employee “recovered” it, and then spent on things that were, perhaps, less than mission-critical. But since 2004 they’ve had to turn it over to the agency, and I for one am confident that they all do so very, very diligently.

It’s not clear exactly how much the TSA collects this way, but there is some evidence that in 2013, TSA was scrounging about half a million dollars a year from security bins. The $3 million mentioned above presumably represents a fund that has built up over time and, for whatever reason, has not been spent on civil aviation security operations. (If it instead represented only last year’s total, which would mean TSA has somehow managed to increase its loose-change collections by 600 percent since 2013, somebody should look into that.)

This is not a huge amount in the context of the national-security-boondoggle budget,  of course, but still we’re talking about millions of dollars that travelers have been unknowingly providing to the TSA. And at least some people think TSA shouldn’t be keeping it.

In 2013, U.S. Rep. Jeff Miller (R-FL) introduced a bill that was actually called the “TSA Loose Change Act,” which would have required the agency to give the money to nonprofits that provide benefits for members of the armed forces and their families. That bill easily passed the House (the half-million dollar figure above was mentioned during the debate), but then quietly died in the Senate Commerce Committee. The law was amended instead to say that TSA is required to make “reasonable efforts” to donate any clothing left behind to charity, but for whatever reason, the Senate decided it was fine with letting the TSA keep the coins it can scrounge.

So make sure you get everything out of your pockets before you go through the scanner, I guess, but if you had any change in there you might want to keep an eye on your bins.

Can the President Kill a U.S. Citizen in the U.S. Without Trial? Attorney General Says Yes