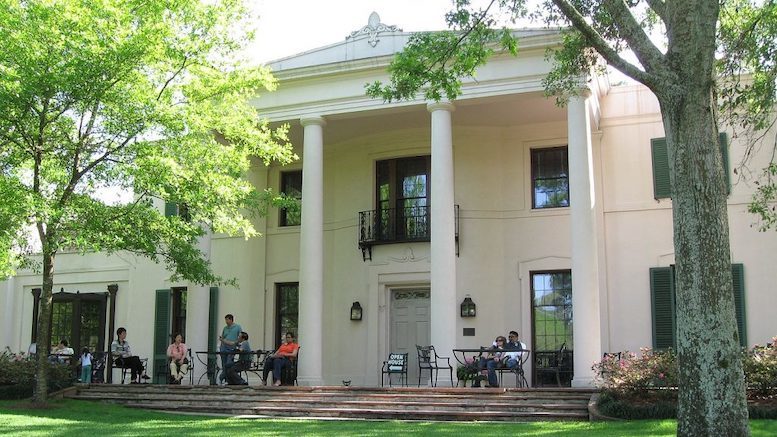 The Bayou Bend Museum, which is near a bayou (image: Postoak via Wikipedia)

The Rule, as you know, is that an attempt to escape from the authorities will fail if it involves water. See, e.g., “Seriously, Can We Get the Word Out Re: Water Escapes?” (Oct. 3, 2018). Not that I need to explain this again to you, but the basic problem is that once you are in the water, you are at a serious disadvantage in terms of speed, maneuverability, and in some cases survivability. All the authorities really have to do is wait until you realize this.

I have previously recognized an exception to The Rule, an exception that may apply in rare cases in which the escape-attempting party has access to the necessary kind of watercraft. See “Speedboat Escape Is Exception That Proves the Rule” (Aug. 3, 2018) (discussing the temporary escape of the thieves who stole the Swedish crown jewels and fled via Lake Mälaren). A recent case involves this same exception, and arguably a second one that may have made the difference here (at least for now).

Last week, the Houston Chronicle reported that two people who tried to burglarize the Bayou Bend museum “remained on the run … after fleeing by boat on the Buffalo Bayou and escaping from authorities through a storm drainage tunnel.” The museum is located in the former mansion of a Houston civic leader and philanthropist (who was, by all accounts, a truly wonderful person despite being cursed with the name “Ima Hogg” by her father). It is only about 100 meters from Buffalo Bayou, a waterway that travels through central Houston before eventually emptying into Galveston Bay. According to the report, the burglars tripped an alarm, a security guard called police, and officers spotted the man and woman fleeing the building. They headed for the bayou, and normally that would be the end of our story, according to The Rule. But it turned out they had arrived by boat, and they used that boat—which, importantly, had a motor—to make their getaway.

Or at least to start their getaway. The fact is that they didn’t get very far by boat, because they ran into one of The Rule’s ramifications almost immediately. If the waterway you have chosen is a river (or is shaped like one, as Buffalo Bayou is), then the number of directions you can flee is quite limited. Specifically, it is limited to two. And if the waterway runs through an urban area, there will probably be many points at which it is crossed by bridges, upon which police with guns can stand. So—unlike the Swedish case, which involved one of the largest lakes in Europe—these thieves had all the disadvantages noted above. According to KHOU 11, officers were able “to get on the Shepherd bridge and the Loop bridge and kind of block them in,” thus rendering the boat pretty much useless:

In fact, it was so useless that the police didn’t even deploy a boat of their own. Instead, they called in a dive team. This was probably because the bayou also connects with Houston’s sewer system via drainage tunnels that aren’t navigable, so boats would be of no use to anyone in there. And, in fact, the dive team found the suspects and their boat hiding under a culvert. When officers moved in, the suspects fled into one of the tunnels. Officers followed, but called off the search after about an hour, concerned because they were out of radio communication. To date I haven’t found any reports of an arrest being made in the case, so we do seem to have here an example of at least a temporary escape by water.

And while it did involve a boat, and that boat had a motor, under the circumstances we might need to make another limited exception to The Rule, because they did not escape by boat. They escaped because they were willing to flee into a sewer. This is not just nasty, but also dangerous. While there was no significant precipitation in Houston around this time, there is another potential problem you should be aware of when considering whether to flee into Houston’s sewer system in particular.

I of course can’t say for sure whether alligators infest Houston’s sewers, or even whether there are any alligators in there at all. But if I were considering fleeing into Houston’s sewer system, I would absolutely assume that a horde of alligators were in there waiting for me to do just that. There is ample evidence that this is entirely possible. See, e.g., “19 Alligator incidents in the Houston area you might remember,” Click2Houston.com (June 14, 2019) (one of which was “Gator wranglers in Galveston County show how to handle [gator] stuck in drain”); “Houston fire chief warns of risks from sewer bacteria, alligators,” Reuters (Sept. 9, 2017) (also snakes); “Alligator calls storm sewer home,” Houston Chronicle (Jan. 10, 2005); and of course most importantly see “Bad Places to Hide: Island in Alligator-Infested Lake,” Lowering the Bar (Mar. 30, 2016) (describing an escape attempt that ended in a lake just north of Houston, shortly after the suspect noticed the gators). In fact, Click2Houston quoted one local resident as saying he had personally seen “alligators and snakes and stuff” in Buffalo Bayou itself. (Ordinarily I’m not sure I’d rely too heavily on those residents’ testimony, but here other evidence corroborates it.)

So while we might say that fleeing into a sewer system is an arguable exception to The Rule, in that it may increase the chance of escape, it’s still a bad idea for all the reasons noted above. I would point out that although the suspects haven’t been captured yet, that doesn’t necessarily mean they’ve escaped. For one thing, they had to abandon their boat, and police may be able to trace that back to them. Given where they chose to flee, though, escaping from the police may be the least of their worries.

Senator Agrees To Do That Crack Cocaine Thing