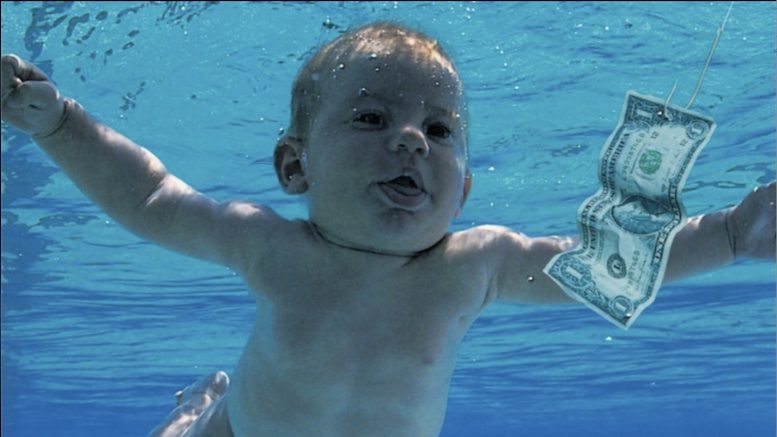 It feels stupid and contagious

Last year I predicted that Spencer Elden, once an infant who appeared on the cover of Nirvana’s 1991 album Nevermind and now an adult who files stupid lawsuits, would recover zero dollars in his lawsuit against the band. See “‘Nevermind’ Cover Baby Sues Nirvana for Showing Him Naked” (Sept. 2, 2021). Technically, I predicted that he would recover less than the $200 his parents were paid for the photo shoot, but I was still right.

As you may recall, Elden sued Nirvana, L.L.C. (yes, Nirvana is an L.L.C.) and others—but, oddly, not his parents—alleging that because he was naked on the album cover (at four months old), the cover constituted “commercial child pornography” in violation of federal law. See 18 U.S.C. § 2252A. (It doesn’t.) The law allows the victim of such a crime (which this wasn’t) to bring a civil action, but the action has to be filed “not later than 10 years” after (1) the plaintiff turns 18 or (2) discovered the alleged violation or injury on which the claim is based. 18 U.S.C. § 2255(b).

Elden didn’t file until August 2021, so the first option was out. And he couldn’t credibly argue he had just now discovered that was him on the album cover—mainly because his parents told him, he’s repeatedly admitted he knew, and also the album sold about 30 million copies worldwide during the past 30 years, so it wasn’t exactly a secret. But he could argue something only slightly less stupid: that under this law a person should be able to sue within 10 years of discovering any alleged “violation” or “injury”—even if he had known about millions of other alleged violations and/or injuries for decades.

First, the court held, the statute only applies to a person “who, while a minor, was a victim of a [predicate] violation….” In other words, the “violation” of this child-pornography statute must have happened when the victim was a child. Or else it would not have been a violation, because the victim would not have been a child at the time. See how this works? Congratulations, because Elden’s lawyers apparently didn’t. As the court put it, the “opposition largely ignore[d] defendants’ textual arguments” about this provision—meaning, they just pretended the words “while a minor” aren’t in the statute. Or didn’t read it, which is also not great.

Second, the court also rejected the argument that Elden had just now (or at any time during the last 10 years) discovered his “injury.” It is true that, under this statute, the “injury” doesn’t have to occur when the victim was a minor. This could make sense if, for example, the victim was 17 when the image was created (assuming it violated the statute), but the image wasn’t published until after the victim turned 18. The original violation might also have been an injury, of course, but the publication could be a new injury for purposes of the limitations period. Okay.

But as the court pointed out, Elden admitted in his opposition to the motion to dismiss—because not even his lawyers were willing to deny it—that “he knew of [alleged] injuries arising from defendants’ activities related to their use of his image on the Nevermind album cover more than ten years before he filed this action.” Arguably, he had admitted this even in the original complaint by alleging “Defendants knew that Spencer had a reasonable expectation that the sexually explicit images depicting him would remain private,” which can only be referring, stupidly, to expectations he had as an infant. But he did not dispute that he knew or should have known by at least 2011 that at least 30 million images of his four-month-old baby business had been very public for at least three decades. And so the court dismissed without further leave to amend. (It had, somehow, given him leave to amend twice before).

I noticed this week that Elden has appealed, I assume because he and his lawyers are gluttons for punishment. I want to point out that, according to the initial complaint, “Spencer’s true identity and legal name are forever tied to the commercial sexual exploitation he experienced as a minor which has been distributed and sold worldwide from the time he was a baby to the present day.” No. Spencer’s true identity and legal name are forever tied to a stupid lawsuit he decided to file alleging he was commercially sexually exploited as a minor 30 years ago because his parents let someone take his picture. As we’ve discussed before, if you don’t want to be embarrassed by stupid lawsuits, don’t file stupid lawsuits. I suppose I shouldn’t complain that people still haven’t learned that lesson.

Good Reason to Kill #61: Insisted the Earth Is Flat