There are many great lines Justice Fergus O’Donnell’s opinion in R. v. Duncan (2013), which was an otherwise unremarkable case except that the defendant tried to run one of those “sovereign citizen” defenses up the flagpole. That didn’t go so well:

Thus it was that the trial began with Mr. Duncan objecting to us proceeding on the basis that I had no jurisdiction over him. Mr. Duncan provided me with an “affidavit of truth”, a rather substantial volume that appeared to me to be the result of somebody doing a Google search for terms like “jurisdiction” and the like and then cobbling them together in such a way that it makes James Joyce’s Ulysses look like an easy read. This hodgepodge of irrelevancies relied upon by Mr. Duncan was one of the misbegotten fruits of the internet. Finding it was a waste of Mr. Duncan’s time; printing it was a waste of trees and my reading it was a waste of my time and public money. 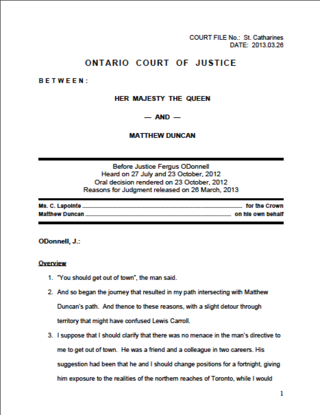 Definitely worth a read. Also added to the Case Law Hall of Fame.