Former GOP leader Tom DeLay, who retired from Congress in 2006 after being indicted on still-pending money-laundering charges, is back.

He will be appearing on the next season of “Dancing with the Stars.”

Yes, it is sometimes impossible to tell the difference between real news and what one might find on The Onion, and this is one of those times. But this does appear to be real. ABC stated on August 17 that DeLay would be one of the contestants on the next season of the popular show, joining a celebrity cast that will therefore “include[] an Osmond, a cowboy and a former House majority leader.”

“I love dancing,” DeLay said on Good Morning America, adding, “You’ve got to love dancing if you’re from Texas.” Well, maybe certain approved kinds of dancing, like the two-step, to which DeLay specifically referred on his new website, “Dancing with DeLay.” 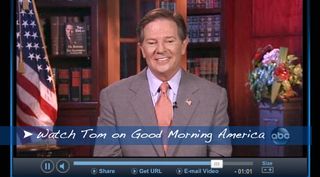 DeLay, who was nicknamed “The Hammer” because of his forceful and uncompromising style in Congress, now invites website visitors to “two-step with tom.”  One can also “Tweet with Tom” or “Join Tom on Facebook,” if one is so inclined.  Tom’s most recent tweet as of Tuesday morning:

headed to the studio for my first rehearsal and to meet my partner.  Hoping it’s not Nancy Pelosi.  🙂

“This is going to be so fun and so crazy,” said DeLay, uttering words he probably has not said since just before the House vote to impeach President Clinton. DeLay’s wife was quoted as saying that DeLay is a “really good dancer” who knows the two-step, polka, waltz, country swing, and less believably, “disco.” (As far as I know, “disco” is not an actual dance, but maybe we will learn differently this season.)

Others were less impressed by DeLay’s alleged ballroom skills, such as Andrew Wheat, a member of Texans for Public Justice, a group that helped spark DeLay’s prosecution. “It would be [more] interesting to see if Mr. DeLay can do the Perp Walk,” Wheat said. “Does he know that step?”

Californians Can No Longer Be Forced to Join a Posse

No Damages for Embarrassment of Owning Three-Legged Dog