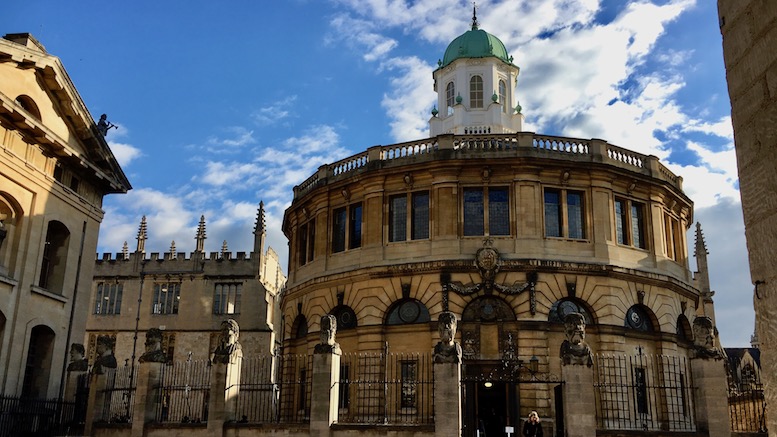 Oxford, home of the comma (image: me)

The Guardian reports today that a graduate of Oxford has sued the University for giving him “a 2:1 rather than a first”—which appears to be the metric-system equivalent of “a B rather than an A”—in a history class 16 years ago. Faiz Siddiqui, now 38 and a solicitor, alleges that the apparently embarrassing 2:1 in his Indian Imperial History course has, as his lawyer put it, “denied him the chance of becoming a high-flying commercial barrister.” He demands £1 million in lost earnings, which even now is a lot of money.

I’d be interested to hear from any high-flying commercial barristers as to the importance of Indian imperial history in that profession. I may be underestimating it.

Siddiqui’s claim is apparently based on the fact that Oxford has admitted it had “difficulties” in the Asian history department in 1999-2000 because four of the seven faculty members were on sabbatical. This put greater pressure on the historian teaching Siddiqui’s class, allegedly resulting in teaching that Siddiqui and his lawyer described as “negligent,” “appallingly bad,” and “objectively unacceptable.” Of the 15 students in the class, his lawyer claimed, 13 of them got their “lowest or joint lowest mark” in Indian imperial history, something he described as a “statistical anomaly” that supports his client’s position.

It would be a statistical anomaly if Siddiqui won this case, judging by the results in similar American cases. Because of course there have been many of those. Most of the recent cases have involved the slightly better argument that a law school misled applicants by overstating the percentage of graduates who end up getting a job. But even with that slightly better argument, these claims have gone nowhere. According to the New York Times, out of 16 such lawsuits only one has even made it to a jury—not too surprisingly, that was here in California, but even a California jury rejected the claim. (Another case was apparently settled last year for a total of about $40K, but that’s basically a cost-of-defense settlement.)

A major problem with these claims, of course, is causation. Even if you could prove fraud or negligence, you’d still get nothing unless you could also prove it’s more likely than not that your harm was actually caused by those acts. And because it’s entirely possible that even without the negligent teaching, a student might have received the same grade or been unable to find a job especially in a tough job market, it’s going to be very difficult to prove causation.

For variants on this problem, see “Former Law Students Claim Their Bad Grades Were ‘Arbitrary and Capricious,'” Lowering the Bar (Feb. 13, 2012); “Can You Sue Somebody for Forcing You to Go to Law School?” (Dec. 5, 2011) (spoiler: no); “Law School That Didn’t Exist Is Sued by Student Who Didn’t Take Classes” (Mar. 5, 2008); and cf. “Law Student Claims Discrimination Against Unskilled Typists” (June 1, 2007) (alluding to the causation problem but not really getting there for what are hopefully obvious reasons).

And it’s going to be even more difficult if your argument is that you’d have become a high-flying commercial barrister if you’d only gotten that A in Indian Imperial History (or any other class). It will also be difficult to prove how high you would have flown, for that matter.

In Siddiqui’s case, he should also lose because the allegedly negligent teaching happened back at the end of the last millennium. While I am not an expert on the Limitations Act 1980 (which is not my fault, because I deserved an A in Russian History), it looks to me like he had six years to bring the claim once it accrued (probably when he realized he had been “harmed”), except that it would be barred anyway after 15 years from the date of the fateful grade. Since that was in 2000, and any “harm” would have come to his attention long ago, time’s probably up. Based on the Guardian report it looks like Oxford has made this very argument, which is a likely winner. It’ll probably win anyway, of course, for the reasons above.

Things are tough out there, it’s true, but suing your school is usually not going to be the answer. In fact, if you’re suing your law school for bad grades, at least, your claim kind of disproves itself.

Slight Problems Found With “Nurse of the Year” Award