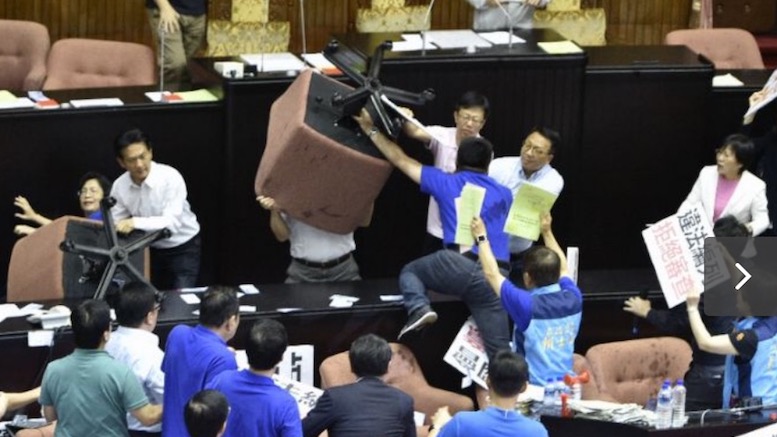 The chair recognizes the gentleman from Taipei (image: detail from an AFP photo)

Okay, I changed it to read “Sen. Mitch McConnell” and “health-care bill.” Originally it read “Premier Lin Chuan” and “report,” and appeared in this July 13 story on a recent debate—sorry, “brawl”—over an infrastructure bill in Taiwan. This was the second day of “chaos” surrounding the controversial proposal, which is a multi-billion-New-Taiwan-dollar plan that the opposition says is designed mainly to hand out goodies to the ruling party’s followers. They are quite strongly opposed to it.

The first day’s negotiations involved only “angry scuffles” and some grabbing of throats, but by the second day things had (arguably) escalated to the hurling of water balloons and at least the threatened hurling of chairs. Apparently no one was seriously injured, though one lawmaker reportedly felt “unwell” enough that he or she had to go to the parliament’s clinic.

That clinic is presumably well-equipped for combat medicine, because as you may recall this is not an especially rare development in that super-contentious legislature. To be honest, I don’t know how often it happens, but I do know that for whatever reason, I find it much funnier than I probably should.

For example, although it is impossible to believe that it was more than eleven years ago now, I will never stop laughing about the time that a member of the Democratic Progressive Party filibustered a bill she opposed by grabbing the bill and trying to eat it:

Amid the chaos, DPP deputy Wang Shu-hui snatched the written proposal from an opposition legislator and shoved it into her mouth, television news footage showed.

Wang later spat out the document and tore it up after opposition lawmakers failed to get her to cough it up by pulling her hair. (Sydney Morning Herald)

Never! Not even after being lectured by a scholar who insisted that, under the circumstances, “eating the bill [was a] simple, effective, and brilliant” strategy to halt a dangerous piece of legislation. Fine. It was simple, effective, brilliant, and hilarious. And as long as the legislation is only a couple of pages, it might actually work. Don’t try it with the budget, though.

The foofaraw last week was fairly tame by comparison to the 2006 rumble, since so far as I can tell no chairs were actually thrown, just hoisted menacingly. Although there was the light strangling on day one, which I’m pretty sure is a violation of Robert’s Rules of Order.

This is not just picking on Taiwan, either, because the same thing happens elsewhere. See, e.g., “Flying Kick Delivered During Debate in Turkish Parliament” (2014), “Food Fight Breaks Out in Ukrainian Parliament” (2010), and “Tear-Gas Filibuster Fails in South Korea” (2011), that last one being the sequel to 2008’s “Legislation Breaks Out During Brawl in South Korean Assembly,” where somebody tried to cut though a door with a chainsaw. That one was also particularly impressive.

To my knowledge, we haven’t had a serious physical brawl in the U.S. Congress since 1856’s Brooks v. Sumner (Brooks won), but there was a minor beating in Alabama a while back, and this guy in Illinois really wanted to hit somebody, maybe everybody. But he didn’t. Maybe this suggests the level of parliamentary violence trends downward over time? I suppose that would be a good thing.

Sometimes It Takes Money to Make Money (From Insurance Fraud)