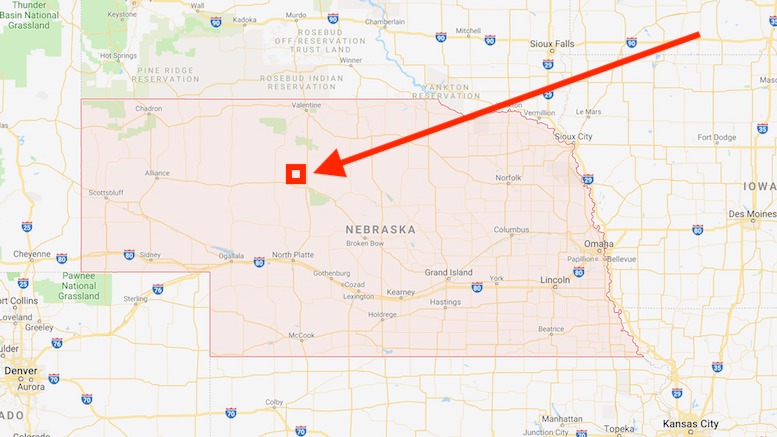 One possible location of Mini-Nebraska (not to scale)

The Lincoln Journal-Star called this “an imaginative, out-of-the-box legislative proposal.” Which is not necessarily the same as saying they think it’s a good idea.

State Sen. Paul Schumacher introduced LR269CA on January 4. If it passes, the following amendment to the state constitution would be put on the ballot for voter approval in 2018:

Notwithstanding any provision of this Constitution and subject to the limitations of the laws and treaties of the United States, the Legislature may delegate complete or partial sovereignty to one area of the state not to exceed thirty-six square miles in area and a population density of ten persons per square mile for a period not to exceed ninety-nine years under such terms and conditions as set by the Legislature at the time of the delegation.

That is, the legislature could create a special area to which, apparently, none (or only some) of Nebraska’s state laws or regulations would apply. As the proposal recognizes, the area would still be subject to federal law and the U.S. Constitution because Article VI makes those the “supreme Law of the Land” (weird capitalization original). But this would allow the state legislature to create, for up to 99 years, one 36-square-mile mini-Nebraska containing not more than 360 mini-Nebraskans.

At least that’s what I would insist the residents be called.

The report quotes Schumacher as saying the point would be to encourage economic development, most likely by attracting corporate investment. “If I were a major business,” Schumacher said, “I would not want Omaha or Lincoln or Des Moines telling me what to do.” (Des Moines is in Iowa, but let’s assume he was suggesting Iowa should also give this a try.) He also phrased it, though, in slightly more ominous terms, saying that if the provision passed, “A major global company or coalition could have [its] own development in the center of the country.” You could even “have your own state,” Schumacher explained.

First, Nebraska could not give someone their own “State” with a capital S, which is what “complete sovereignty” kind of suggests. Surprisingly enough, the Constitution has something to say about how “States” can be created. It says less than you might think, but it does say this:

New States may be admitted by the Congress into this Union; but no new State shall be formed or erected within the Jurisdiction of any other State; nor any State be formed by the Junction of two or more States, or Parts of States, without the Consent of the Legislatures of the States concerned as well as of the Congress.

Art. IV, § 3 (emphasis added). This was hotly debated at the Convention because some big States claimed territory the others disputed—New York claimed Vermont, for example, and Virginia and North Carolina claimed huge areas on the western side of the Appalachians. It looks like section 3 was intended to calm everybody down; small States could not be absorbed, or big States split up, without their consent (unless maybe, let’s say, they started a civil war they didn’t win, but that wasn’t discussed at the time).

The section isn’t especially clear, as you may have noticed because you’re such a nerd: because of the second semicolon, read literally no new State could ever be formed within an existing State (because the consent part would only apply to the last clause). That would mean no mini-Nebraska, period. But in fact, four States have (arguably) been created this way already: Vermont (which escaped from New York in 1791), Kentucky (from Virginia in 1792), Tennessee (from North Carolina in 1796), and Maine (from Massachusetts in 1820).1 Those involved disputed territory, so it may not be quite the same thing. But it seems clear the Founders intended to allow changes like this as long as the state and federal legislatures all agreed. Still, this means Nebraska could not unilaterally create an internal State of Mini-Nebraska.

It is not impossible that a GOP-controlled Congress might think seriously about agreeing to a Mini-Nebraska, since a majority of mini-Nebraskans would likely vote mini-Republican. That would give the GOP another representative and two more senators. I suppose there could be any number of mini-States created that way, but both sides could do it, so it would be pointless and would rapidly get very ridiculous. Hopefully that means it’s unlikely. (If you want to read more about the surprising number of proposals to carve up States in other ways, see this WSJ article (sub. required) discussing the book Lost States. Interesting, although, like yesterday’s  “New California” declaration, most of these are very unlikely.)

Second, I guess Nebraska could create a completely or partially “sovereign” small-S state, but I don’t think it needs to amend its constitution to do that. A state legislature can do what it wants as long as it doesn’t conflict with the state constitution or federal laws. So it could say, for example, that businesses in some area don’t have to pay state taxes, or aren’t subject to some state reporting or inspection requirements, or whatever. In fact, they do this kind of thing all the time. I guess you could call that a grant of “sovereignty,” but it doesn’t take a constitutional amendment to do that. It just takes a statute.

The word “sovereignty” usually refers to some kind of self-government—but again, states already delegate sovereignty in that sense. In fact, some of you reading this may, at this very moment, live in a community to which a state has delegated at least partial sovereignty. (They are often called “counties,” “towns,” or “cities,” although other terms are also used to describe these exotic locales.) So, again, it’s not entirely clear to me what this is for. The proposal is set for hearing at the end of the month, so maybe we’ll learn something then.

There does not appear to be any connection to our friends the “sovereign citizens,” so that’s good news.

1 Some would say there’s a fifth example, but I think a better explanation for West Virginia is Gettysburg. More on that later.

Former Pathological Liar May Be Deposed in Contract Case