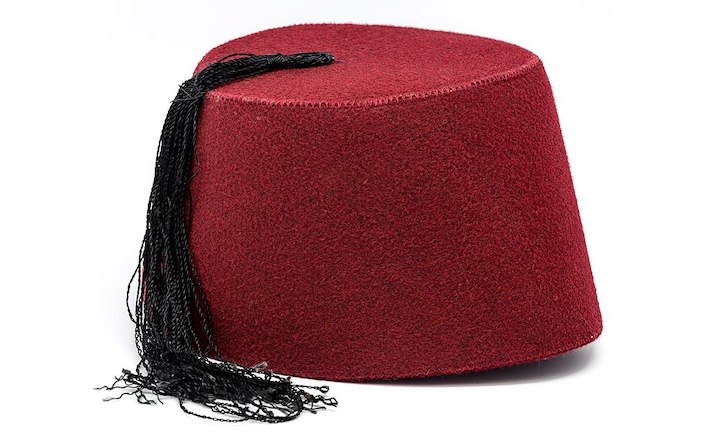 Just a quick warning to let you know that if someone knocks on your door and says you have to move out immediately, and that person is wearing a fez (see above), you probably don’t need to pack your things right away. Some investigation would be warranted even if the person isn’t wearing a fez, but unless you live in Morocco, maybe, the fez should serve as an additional red flag.

Sources report that last week, several homeowners in the Seattle area received surprise visits from strangers who informed them that they (the strangers) were in fact the legal owners of the properties and asked them (the homeowners) to vacate immediately. “Today is the day!” one apparently kept repeating. Why was today the day? That didn’t seem to be clear.

Also, why were they wearing fezzes? There did seem to be an explanation for that.

The “today is the day” visitor eventually handed the homeowner some official-looking federal-government paperwork and left. But looking a little more closely at that paperwork revealed that the federal government in question was not that of the United States of America, but rather the “Moorish National Republic.” Although I guess that depends who you ask, because the “Moorish National Republic” claims to be the true government of the United States of America, and that it owns all the property in North America. There are a variety of “Moorish” groups in the U.S., most if not all of which are offshoots of the “sovereign citizen” movement, something that has appeared on this site many times given its followers’ penchant for making utterly baffling legal-type claims. See, e.g., “Judge Rejects Man’s Claim to Be ‘Some Sort of Agricultural Product” (Oct. 4, 2017); “King of Australia Says He’s Testing Its Court System” (Sept. 13, 2017); “Judge Finds Alleged Indian Tribe to Be ‘Complete Sham’” (May 13, 2008). Many of these claims involve property, sometimes the claimants’ own property and sometimes the property of another. In Seattle it appears to be the latter.

The claims typically involve official-looking but entirely bogus documents, and jargon-filled legal pleadings that might also appear from a distance to be valid but on closer inspection are pretty ridiculous. So a lot like the Trump team’s recent filings, actually, except the Trump team’s grammar is generally a little better. Also, the sovereigns have a tendency to make up their own grammar and magical symbols, something the Kraken hasn’t tried yet, as far as I know.

According to an expert quoted by the Daily Beast, the Moorish offshoot of the sovereign movement also believes it isn’t bound by the same laws as other citizens, but it has different reasons for thinking that. “Some believe they have diplomatic immunity because they’re members of these North American fictitious tribes, that they’re descended from them,” the expert said. “They believe they were the first inhabitants of the Americas, and that therefore they own everything.” There’s no legal basis for any of this, of course, even if you set aside the historical problems, which are significant.

There also seem to be some problems explaining their adoption of the fez, which so far as I can tell has no connection with any of the tribes indigenous to North America (or at least they became indigenous after walking here from Asia thousands of years ago, as I understand it). According to the SPLC, some members of “Moorish” groups believe they migrated here from North Africa, and that a 1787 treaty between the U.S. and Morocco grants them “sovereign immunity.” (That wouldn’t be true even if that treaty existed, which it doesn’t.) The fez apparently originated or at least became popularized in the Ottoman Empire, which controlled parts of northern Africa for a while, and the term “Moor” is or was sometimes used to refer to various Muslim inhabitants of that area. So that might explain the association.

Or maybe they just like the way it looks. Who the hell knows?

In any event, should one of these people show up at your front door with an official-looking document and suggest you need to move out, you should probably investigate that thoroughly before doing anything at all. Just a suggestion, but you might want to write up a document of your own declaring that you are the legal owner of their hat, and hand it to them preemptively when you see them walking up. Just keep saying, “Today is the day!” until they either give you the hat or go away, preferably both. Your claim is just as solid as theirs, after all.