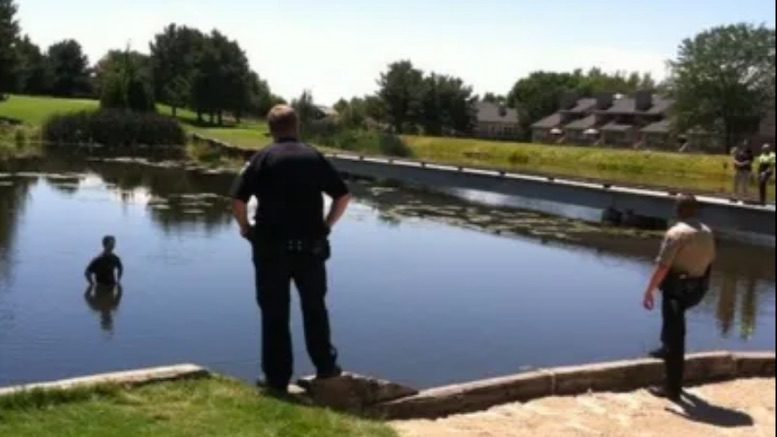 Well, this is probably about as relaxed as a standoff can get and still be called a “standoff.”

As you may recall, earlier this month another miscreant’s path to jail led through a pond, although in that case the evidence linking him to the pond was only circumstantial. After the intended victim stole his car keys, that burglar fled and later broke into a neighbor’s house, taking the opportunity while there to log into—but not out of—his Facebook account. Police surmised that he had been hiding from them in a nearby pond in the meantime, based on the otherwise unexplained “puddles of water” in the second house.

The evidence of pond-dwelling here is about as direct as it gets.

According to KTVB in Boise (thanks, Dylan), the incident began when deputies suggested to a 21-year-old man that he might have violated the terms of his probation. The report says the man was on probation for stalking, and it appears that there had been an encounter between the man and the stalkee. He claimed that she, not he, had violated the no-contact order, but the deputies “discovered that was not true.” It’s not clear what evidence they had to support this, but either it was enough to convince the man he was busted or he suddenly remembered something very urgent he had to do in the direction police weren’t.

This led to a 15-minute chase through suburban yards, onto a golf course, and then into the aforementioned pond. (You can call it a “water hazard” if you want to, but I’m sticking with “pond.”) And that led to the standoff, such as it was, pictured above.

All too often police wildly overreact in situations like these, calling for SWAT-team backup even where only minor offenses are involved. Not here, though. And why rush things? Looks like a beautiful day, and now that he’s in a wading situation it’s not like the guy is going anywhere in a hurry.

Plus he had at least some incentive to come out. “Deputies were able to coax him out of the water after about 30 minutes,” says the report, “during which time only one golf ball landed near him.” You know that was only going to get worse as word of his predicament spread.