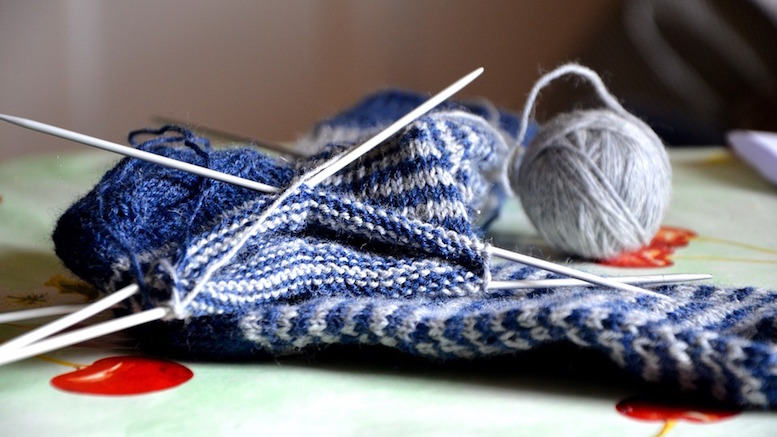 More accurately, he said she can avoid a jail sentence if she can prove by December that she is a “keen knitter,” as her solicitor claimed.

This played out yesterday (July 12) in Dundee Sheriff Court in Scotland, where a woman was facing assault-and-battery charges for a road-rage incident. According to The Courier, the incident happened in January, after the victim allegedly cut the woman off while driving. The defendant “was not very impressed with the accused’s driving,” as the prosecutor put it, “and made her feelings known,” presumably in the time-honored way such things are made known in many Western cultures. She then allegedly followed the other woman for several miles until the latter pulled into a car park, whereupon the accused pulled in front of her, leaped out, opened the door of the other car and punched the victim in the face. The victim didn’t require medical attention, but ’tis battery nonetheless.

In court, the accused’s solicitor noted that while his client had a criminal record, it was more than ten years in the past and did not involve any violent behavior (until now). “She is utterly ashamed of herself,” he told the sheriff (I’ve translated “sheriff” as judge in the headline, which I admit is American-centric), “and says that it was simply a loss of control.” He said his client denied that she had pursued the then-future victim after the initial incident, saying they had simply been coincidentally traveling in the same direction:

As for following the complainer, she indicates that Cardean Street was her intended journey’s end. She is a keen knitter and a nearby specialist wool shop was her destination, but unfortunately this was the same direction in which the complainer preceded her. 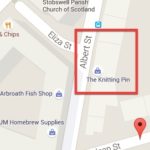 As you know, Lowering the Bar does not simply take stories at face value, even when it really should do so because of the author’s unfortunate but continuing need to bill hours. See, e.g., “Tales of Humpty Doo” (July 7). Accordingly, while I doubted that one would take the risk of fabricating such a story under the circumstances, I did spend .2 hours or so checking it out. And, in fact, there is what appears to be a “specialist wool shop” in the area of Cardean Street in Dundee (though not actually on Cardean Street). According to the report, the initial incident happened on “the Kingsway,” which is north of the map section shown here, and someone traveling south from the Kingsway to Cardean Street, perhaps intending to park therein, would end up just steps from “The Knitting Pin.”

This view is looking north on Albert Street, just to confuse you

Of course, however they got to that point, the accused still ultimately got out and punched the other driver. So whether she was furiously pursuing her down Albert Street, or had completely forgotten her for a few blocks before suddenly getting furious again for some reason, doesn’t seem all that relevant. But I guess it was something to say.

Whether the judge bothered to waste his own time confirming the above isn’t clear, but he does seem to be testing the story in another way, or maybe it just gave him an idea. Since the accused was claiming to be a “keen knitter,” he decided, then knitting for charity might be a suitable kind of community service:

You went in the same direction as your victim, at the very least, and then went to her car door and assaulted her, though I accept that it was out of character. If you are a skilled knitter then I am sure that you could produce some goods for charity. You will bring to court several items that you have knitted that you are prepared to donate to a charity shop. It will not be a meagre amount. You have committed a serious offence … [but now] you have a chance to do something useful with your time. Take this chance.

He didn’t sentence her to knit, though, but rather deferred the sentencing until December, giving her just over five months to be on “good behavior and to produce the knitted items requested by the court.” It’s not clear whether he specified the number of items she must knit or whether they must be of a certain quality. But since jail time is apparently the alternative, I at least would advise her to knit her ass off between now and December.

Finally, I’d have preferred to use the submitter’s suggestion, “Crewel and Unusual Punishment,” but I had no idea what “crewel” meant specifically and guessed that many of you wouldn’t, either. It’s an embroidery technique, so not strictly “knitting,” but whatever. And now you know that, too.

Good Reason to Kill #32: Disagreed About Who Should Win “American Idol”

Has Your Boss Ever Pooped In Your Lunchbox?