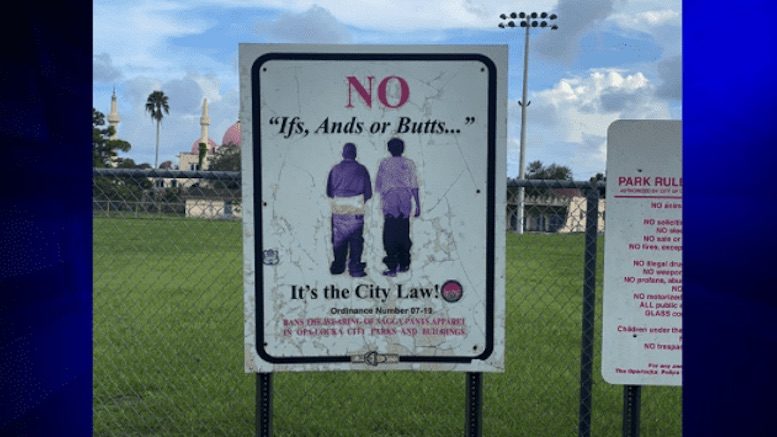 Get it? (image: City of Opa-Locka)

“I hope it isn’t weird,” said the person who sent me this item, “that when I see an article about baggy-pants legislation my first thought is about your blog.” Well, is it weird that my first thought was “why would that be weird?” It is and it isn’t.

It mostly isn’t, because, as at least some of you obviously remember, among the many critically important legal developments I have covered here is the trend throughout early 21st-century America to criminalize the wearing of pants that sag below the waist, often exposing the wearer’s undergarments. Said coverage goes all the way back to February 2005 (!), and that post (“Virginia Joins Assault on Low-Riding Pants“) alludes to something even earlier, which now seems to be lost in the mists of time. But that doesn’t matter, because there was no shortage of low-pants controversy during the next decade or so.

This of course was at a time when, although we had problems in this country, they generally didn’t threaten the practice of democracy or, you know, kill more than a thousand people every day. So there was more room for concern about people’s waistlines.

I would say interest in this issue (mine, legislators’, and probably yours too) gradually dwindled over time, which is not to say it disappeared altogether. It came up in South Carolina as recently as 2018, apparently, but that bill didn’t pass. Now we have further evidence supporting this downward trend, because the Miami Herald reports that commissioners in Opa-locka, Florida, have voted to repeal that city’s 13-year-old ban on excessively saggy pants.

Opa-locka, which has the largest collection of Moorish Revival architecture in the Western Hemisphere; was once regularly visited by the Graf Zeppelin; was the base for the U.S.-led coup in Guatemala in 1954; and whose name derives from opa-tisha-wocka-locka, a Seminole phrase meaning “wooded hummock”; and I did not make any of that up, passed its no-low-pants ordinance in 2007. That ordinance applied only to males, probably because, one might reasonably surmise, only males would actually be dumb enough to walk around in public looking this way. But by 2013, either the females of Opa-locka (and their pants) had also sunk to the same level, or concerns had been raised about equal protection, or both. In any event, the ordinance was amended in 2013 so that it (and hopefully pants) would cover women as well as men.

In fact, the ordinance has been amended five times over the years, suggesting the city council has probably paid more attention to this issue than it did to, let’s say, the U.S.-led coup in Guatemala in 1954. As the ordinance currently stands, it applies to “saggy pants or slacks apparel wherein underwear or undergarments are exposed” in city buildings, parks, and businesses within city limits. Females are also forbidden to wear “saggy shirt or blouse apparel,” whatever that means, though this is apparently okay for males.

The word “saggy” is not defined, which as we have seen before is the kind of thing that can lead to constitutional issues, given the amount of discretion this gives to individual officers who might, possibly, have ulterior motives for spotting a “violation.” See, e.g., “Police Chief Says Low Pants Are Probable Cause for Search” (July 18, 2008) (noting ACLU’s concern about the potential for Fourth Amendment violations and racial profiling); see also “ACLU Says It Will Go to Bat for Mullets If Necessary” (Aug. 8, 2008) (noting ACLU had responded to my question whether it would have the same concern for the rights of those with certain unconventional hairstyles; answer: yes). According to the Herald‘s report, this was one motivation for the commission’s repeal of the ordinance.

Or its likely repeal, that is, because as the Herald also points out, this vote was only the “first reading” of the measure, meaning the repeal will not be official until and unless that is confirmed at a subsequent meeting. But the measure is co-sponsored by four of the five commissioners, so it looks likely to pass. Maybe the fifth commissioner, if he or she is actually opposed and not just sitting it out, will be able to rally supporters and turn the tide. Dumber things have happened.

These days, dumber things happen on an almost daily basis.