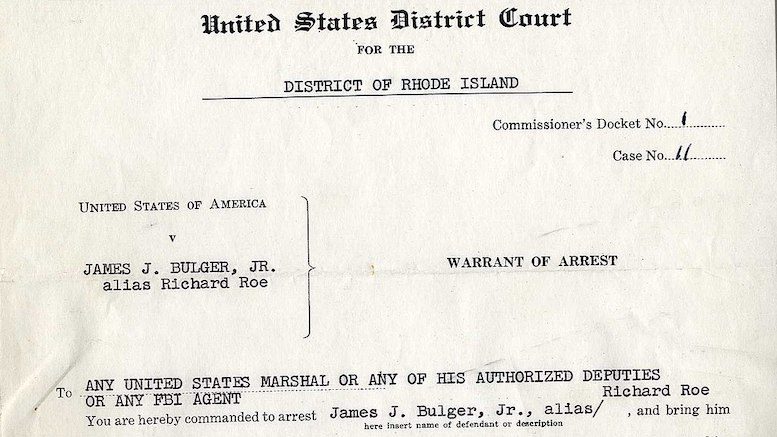 A 1956 warrant for Whitey Bulger, one of many fake names you should probably not give police

Looks like I last offered this advice in February 2020, and as with my advice about trying to escape via bodies of water, the message doesn’t seem to be getting through.

On the way to jail, “Steven Clemmons” reportedly “took a deep breath and told the arresting deputy that ‘he was going to shoot him straight'”—which seems like a really bad way to tell a police officer you’re about to tell him the truth. May I suggest you either try “I’ll be honest” or make absolutely sure you clearly enunciate the last word of that phrase? Anyway, having chosen to speak, “Steven Clemmons” advised the deputy that his name was in fact “Adam Castle,” and that he, Adam Castle, was himself wanted pursuant to warrants for a variety of offenses. This identity checked out, and Castle was then re-arrested as himself and charged with not only those earlier offenses but also a couple more related to his wildly unsuccessful attempt to use a false identity.

The report doesn’t include any information as to why Castle chose “Steven Clemmons” as the name to give police. It’s not a particularly common name, so if he just made it up randomly, the odds that there would be a warrant out for that person seem pretty low. If he was using the name of someone he knows, he needs to try to pose as a better class of person.

Sadly, the report also didn’t say what the real Steven Clemmons was charged with. It’s funnier if someone gives a fake name trying to get out of some minor offense, only to find that the person he’s claiming to be is wanted for something far more heinous. But I can’t say whether that happened here. (As it happens, I found a 2019 report that a “Steven Clemmons” had been arrested in Virginia not too far from where the incident above took place, on charges that included kidnapping and battery of a family member. I have no idea if this is the same person now wanted on other charges, but given the way he’s smirking in his mugshot it wouldn’t surprise me.)

I also have here the somewhat related story of an Illinois man who gave police a fake name in 2019 only to have them question why he had a different name (“Matty B”) boldly and very visibly tattooed on the front of his neck. Did he just really like someone named “Matty B,” or might that correspond to his actual identity, which he had withheld from police? Yes, it was the latter. And that made me think of the somewhat less related story of the gang member who was arrested for murder after a detective saw his mugshot for another crime and noticed he had a remarkably accurate depiction of the scene of a then-unsolved murder tattooed on his chest. So that’s another thing you should not do if trying to avoid responsibility for something.

Can I Use the Carpool Lane If I Have a Prisoner?