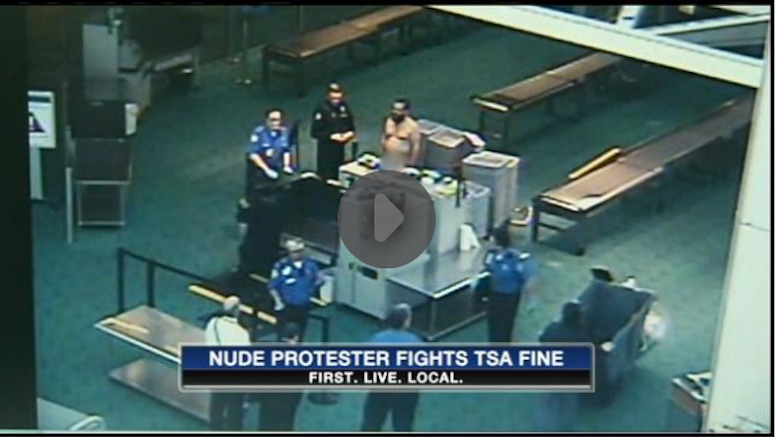 Ninth Circuit: this isn't a protest

Just over five years after John Brennan‘s heroic (and heroically naked) stand against TSA oppression, the Ninth Circuit has rejected his appeal.

As you may recall, Brennan was arrested in April 2012 after he got fed up with TSA screening nonsense in Portland and decided to strip naked as a form of protest. Although obviously this greatly simplified the screening process—or it would have, if the goal were actually to determine whether a traveler is carrying anything dangerous—the TSA acted like it didn’t, and shut down the checkpoint. See “TSA: Wants to See You Naked, Complains When You Get That Way,” Lowering the Bar (Apr. 18, 2012).

Brennan was charged with indecent exposure, and promptly acquitted, because in Oregon “symbolic nudity” is considered free speech that is protected under the state constitution. But if it occurs to you that there’s a similar sort of “free speech” protection in the federal constitution, like maybe in one of those amendments or something, then you must not work for the TSA. It separately charged Brennan with violating the regulation saying you can’t “interfere with, assault, or intimidate screening personnel in the performance of their screening duties,” and fined him $1,000 (later reduced to $500). Its argument, of course, was that he had “interfered with” the screeners even though they made the decision to close the checkpoint instead of conceding he wasn’t a threat and letting him travel.

I think I made my position on this matter relatively clear. See “TSA Fines ‘Naked American Hero’ $500” (Apr. 8, 2014) (opining that “[t]his sort of argument is what we lawyers refer to as ‘bullshit.'”). But in rulings that surprised no one, TSA administrative-law judges upheld the fine. Brennan’s constitutional challenge could not be raised there, because a handy TSA regulation specifically forbids its ALJs from even considering the validity of any TSA requirement “under the U.S. Constitution, … or other law.” And Congress stripped district courts of jurisdiction to consider TSA rulings, so appeals go directly to the circuit court. “[P]lease hope along with me that the Ninth Circuit will reverse,” I hoped in 2014, but if you actually hoped that hope, it turned out to be hopeless.

Brennan made two arguments: first, that what he did was expressive conduct protected by the First Amendment; and second, that either he didn’t violate the “interference” regulation or it’s unconstitutionally vague.

The panel dealt with the first one in a single conclusory sentence: “Brennan fails to carry his burden of showing that a viewer would have understood his stripping naked to be communicative.” But under the circumstances, it’s hard to see what a viewer might have thought Brennan was doing if not sending a message that he thought the security procedures were unnecessary. He didn’t just strip in the middle of the airport, he stripped in the checkpoint line while being delayed by the TSA. The panel doesn’t explain what it thinks viewers might have believed was going on if not some sort of protest.

The second argument doesn’t get much more than a sentence. A rule is unconstitutionally vague if it “fails to provide a person of ordinary intelligence fair notice of what is prohibited, or is so standardless that it authorizes seriously discriminatory enforcement.” The term “interfere” isn’t vague, the court points out, and then just says that courts have often applied the term, “but never in a way that would lead a person of ordinary intelligence to think that he or she could strip naked at a TSA checkpoint and refuse to get dressed, leading to the closure of the checkpoint.” There’s no authority or analysis supporting this, which seems to accept without question the TSA’s position that Brennan, not the TSA, was necessarily responsible for closing the checkpoint. If they said, “okay, you can go,” and he still refused, that’d be different, but I don’t think that’s what happened.

I guess reasonable people can disagree on these points, but it’s disappointing that the court plainly didn’t take the case seriously enough to analyze them. I realize it involved a guy getting butt-naked at the airport, but the state judge was able to see past that to get to the issues. This panel doesn’t seem to have really tried.

One member of the panel, Judge Jay Bybee, is best known for signing the memos drafted by John Yoo that justified the torture of prisoners as part of the “War on Terror,” back when they were working in the DOJ’s Office of Legal Counsel. I’m not saying that the legal opinions Yoo expressed in those memos were so biased and poorly reasoned that just rendering them was an act of professional misconduct, although the DOJ’s own Office of Professional Responsibility did later say that. Nor am I saying that Bybee’s presence on Brennan’s panel was necessarily a bad sign, given his history of extreme deference on “security” issues, but—well, actually, I am saying that. One of the other judges was also appointed by George W. Bush, but the third was appointed by Obama, and the decision was unanimous, so politics alone doesn’t seem to explain the outcome.

I have some concern that the Obama appointee might have been subjected to some sort of enhanced negotiation techniques to get him to agree, but I’m probably wrong about that.

Kansas Man’s 0.57 BAC Impressive, But Not a Record

Court Criticizes Everybody Involved in Briefing That Totaled 5,415 Pages